In an attempt to ride the entire (or at least the majority) of the Rapha Festive 500 in two days, a squad of Collectivists headed down to Harrisonburg to ride from Harrisonburg to Roanoke. And then back the next day. Nathan Goates, Ben Shrewsberry, Darin Alleman, and Matthew Briggs, were joined by Scott Coblentz and Ben Kutil in the adventure of 300+ miles, 20,000ft of elevation gain, and lots and lots of surprises.

Links to the routes:
Day 1: Rockstar Pavè
Day 2: The Return 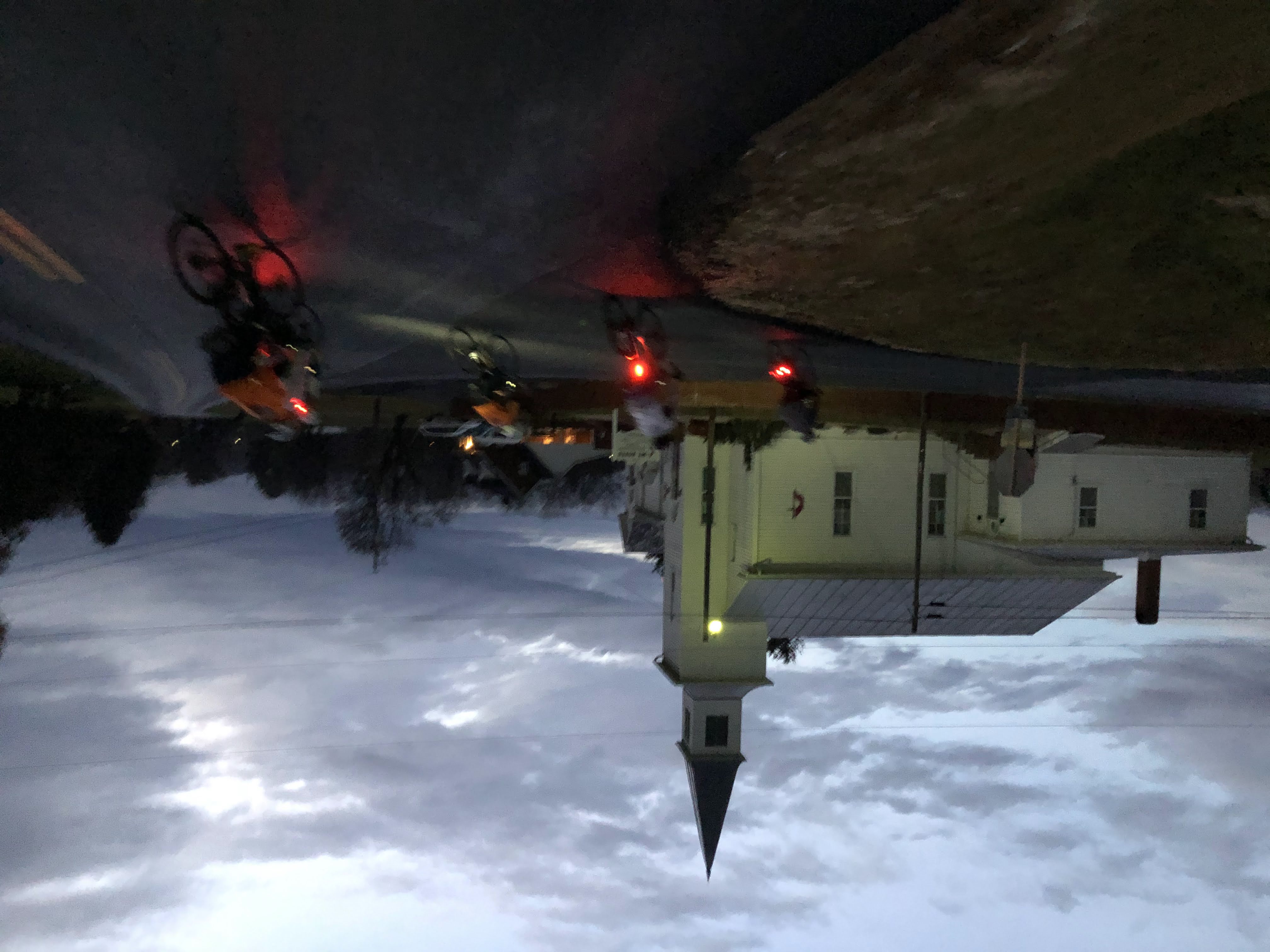 The first day is a route created by the Virginia Endurance Series called Rockstar Pavè. It’s a 165-ish mile route starting in downtown Harrisonburg and taking quiet roads through the mountains to Roanoke. After a night in the Hotel Madison, we were happy to see the forecast had cleared off and there wasn’t much of a chance of rain unlike the original forecast of half an inch. We saddled up at 6:30am and after a few wrong turns we were out of the city and onto farm roads towards the mountains. It was 50 degrees and cloudy, a miracle for late December in the valley.

Shortly after hitting our first section of gravel, Scott had scored the group’s first flat. 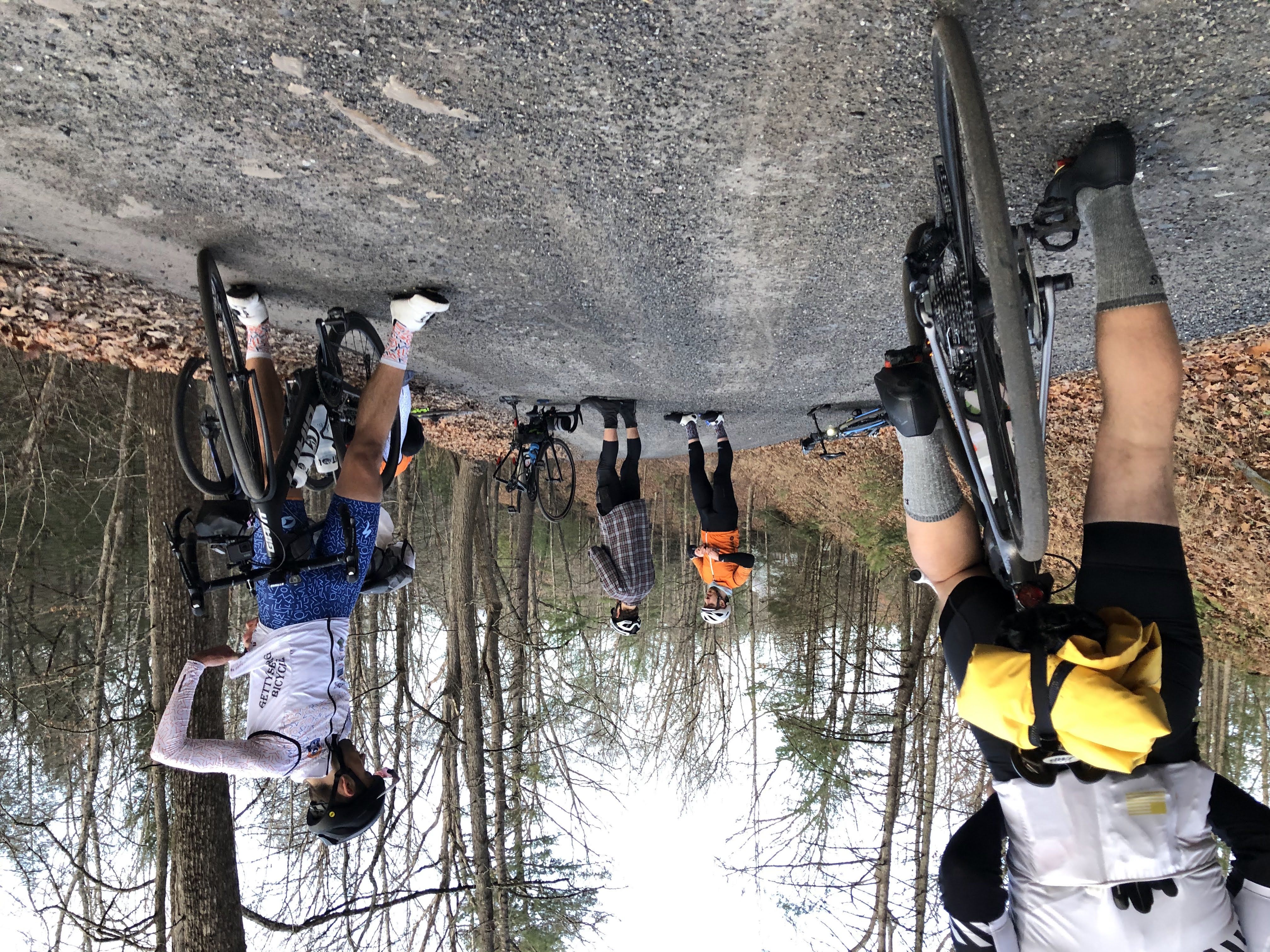 After a quick fix, we were back on it and towards our first store stop of the day around mile 40 where we stocked up on goodies and topped off our bottles. A few warm coffees were also consumed. 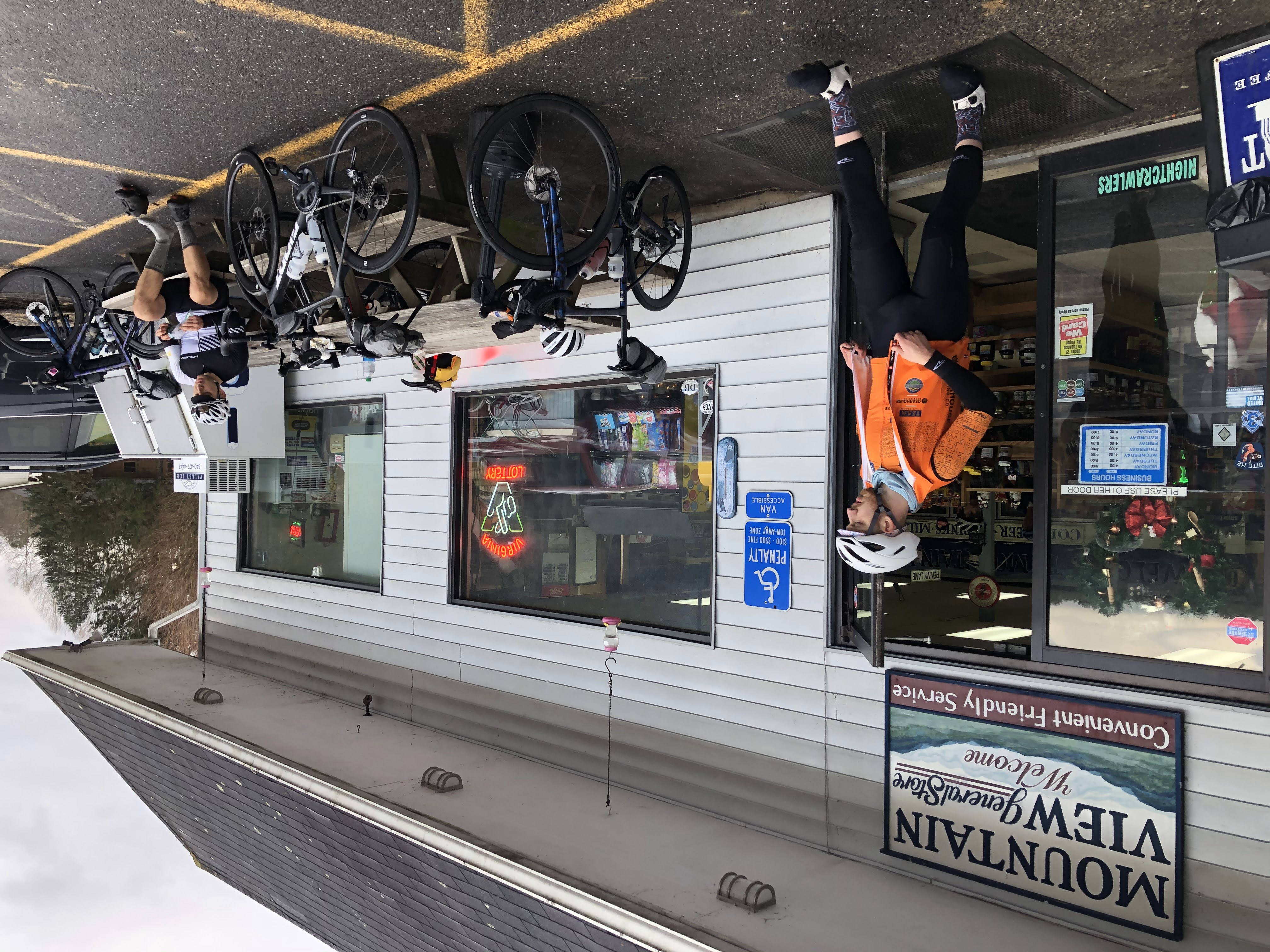 Pushing onwards, we found ourselves on some very delighful gravel roads winding through the valleys. Hardly a car to be seen. Shortly after, the gravel turned back to pavement and we were making seriously good time on the wet roads. 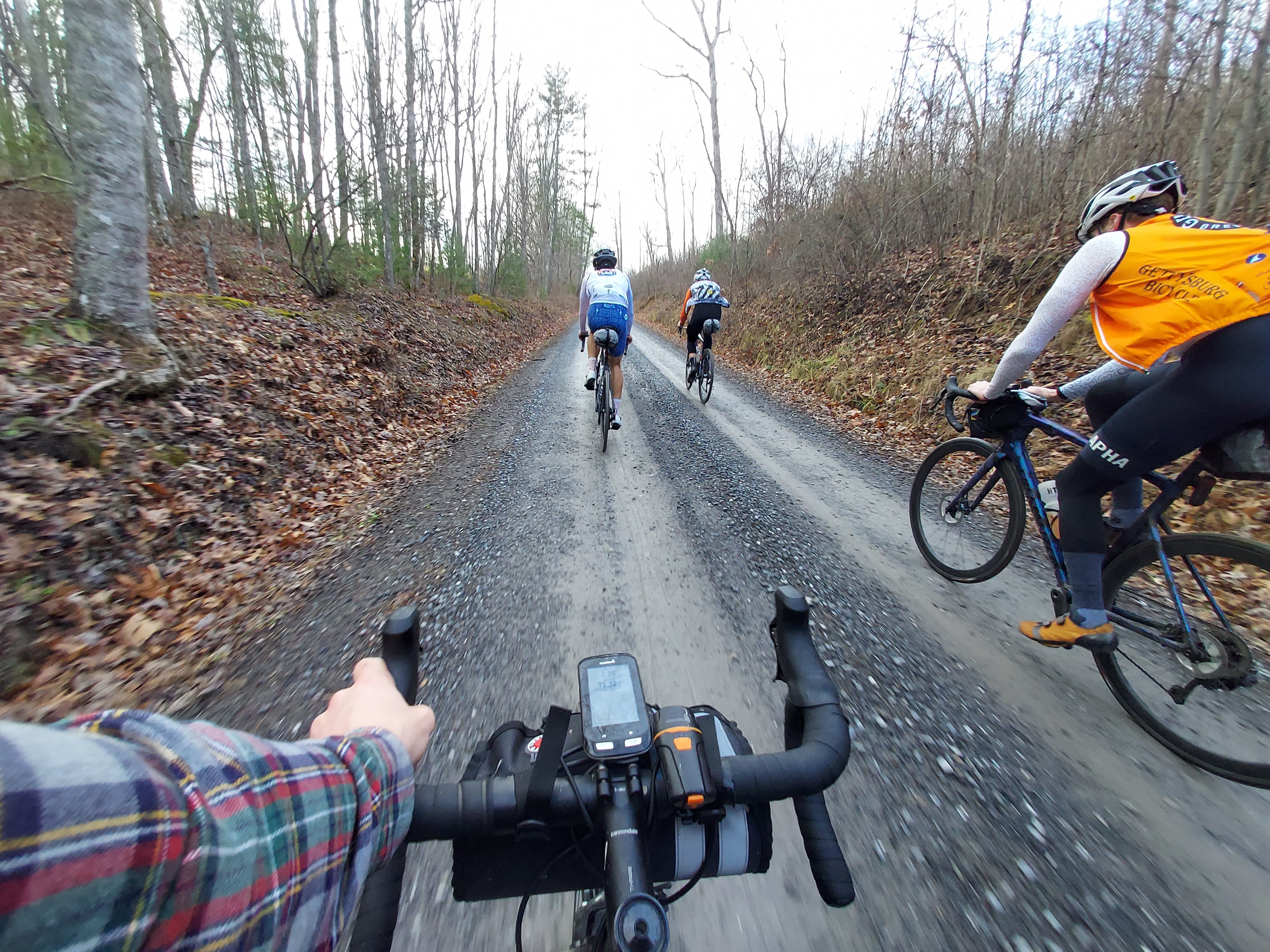 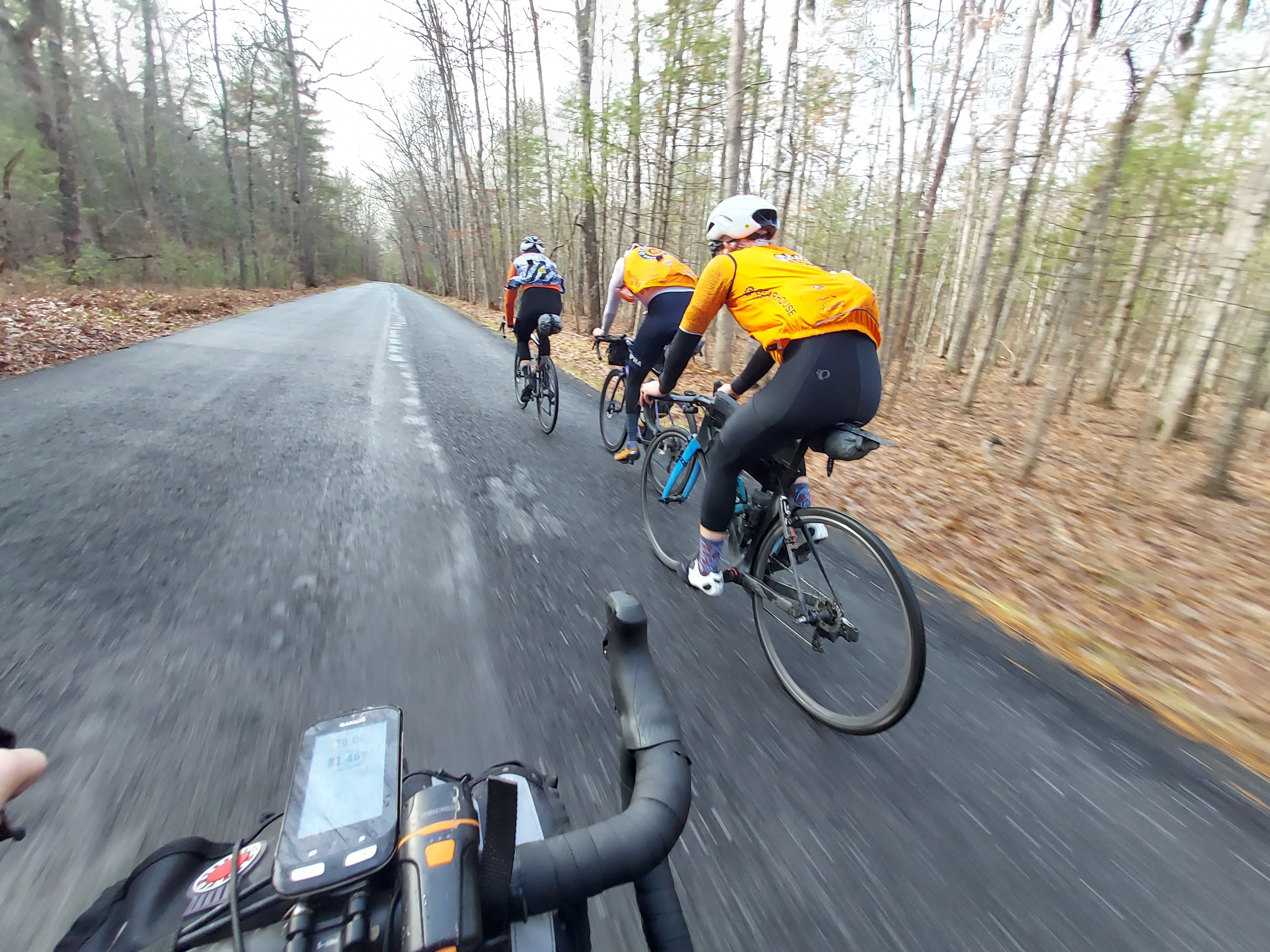 Nearing our second rest stop around mile 90 we found ourselves on a railroad access road to avoid a busy highway leading to the mountain town of Clifton Forge. Huge potholes and bigger than expected gravel were a little aggressive for the road tires we were all running but a little bit of under-biking never hurt. Until, of course, it does. Ben flatted not half a mile from the end of the gravel section and the store right in town. 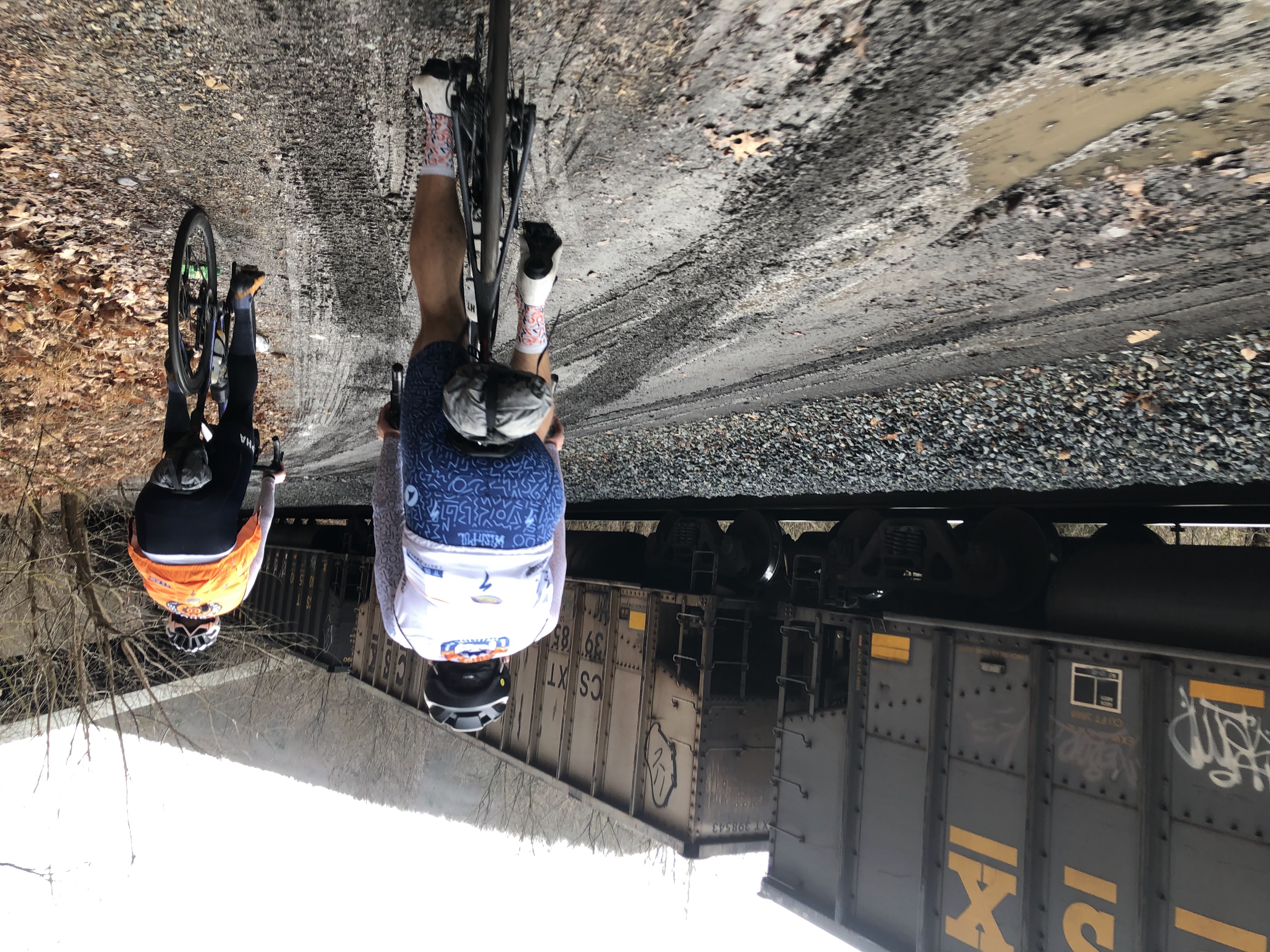 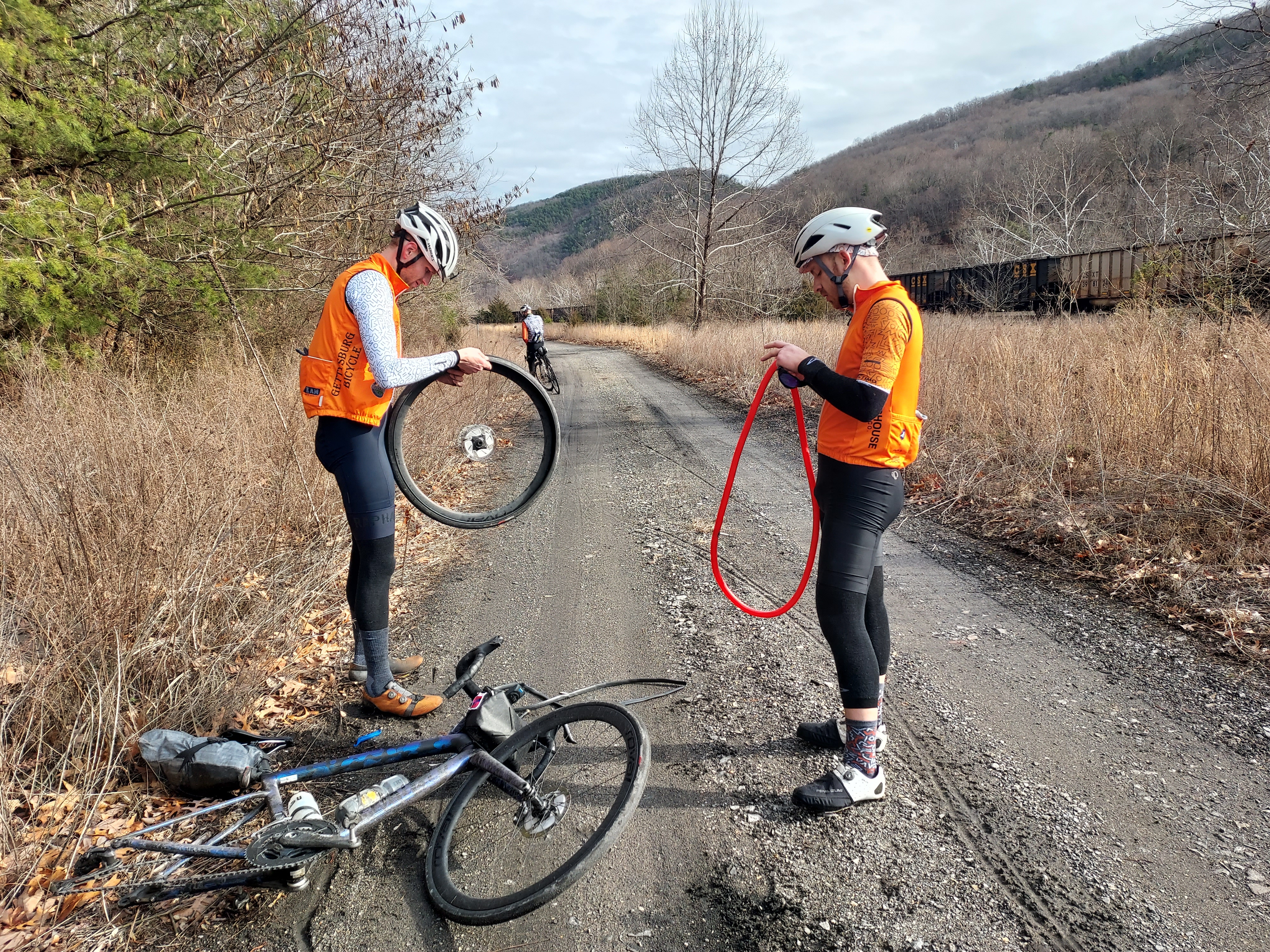 Bold choice, Ben - latex tubes? Anyways, with a fresh tube in we climbed into town and were greeted immediately off the gravel road by a Dollar General. 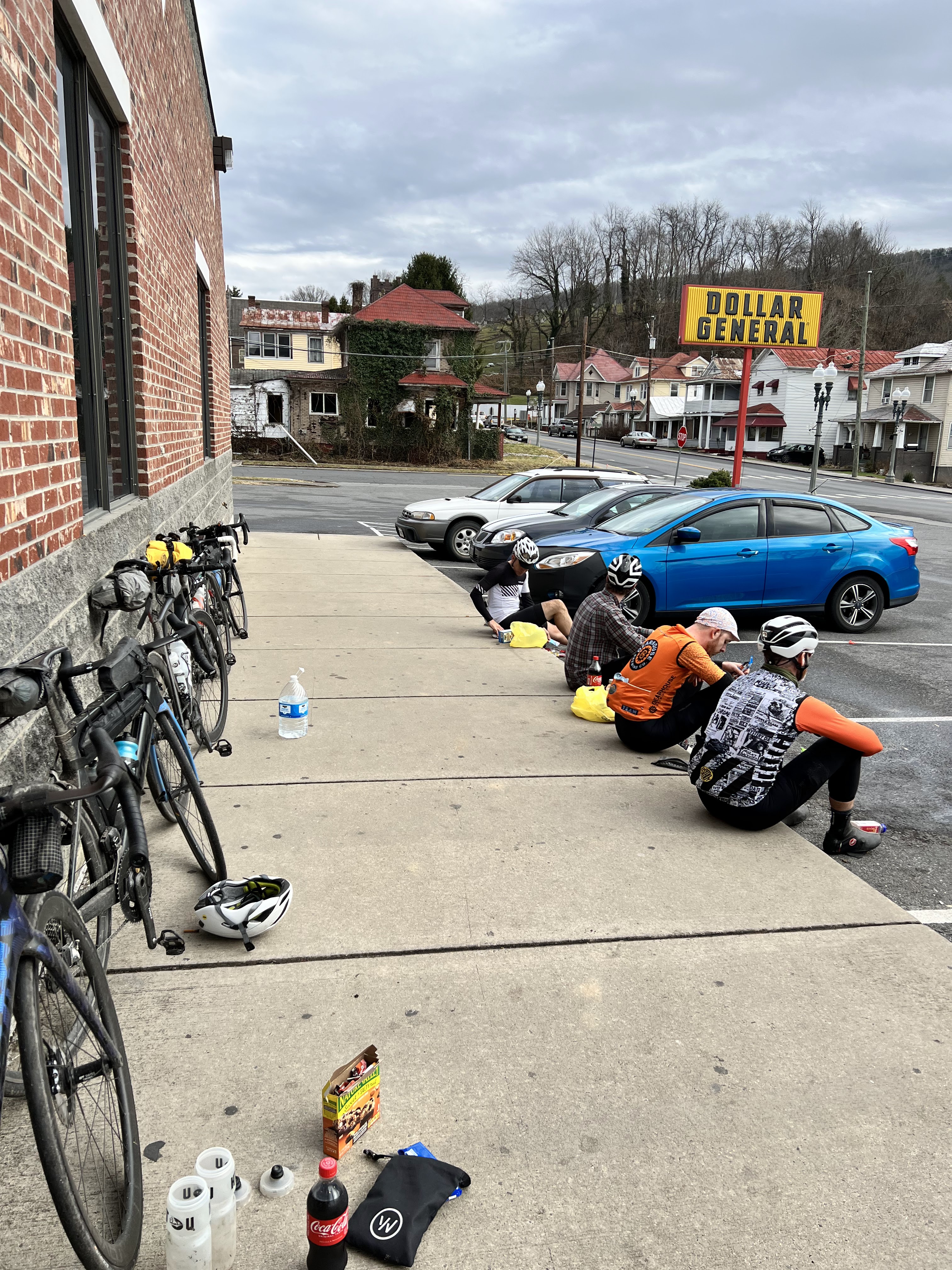 We don’t have a ton of photos between here and Roanoke, but those roads were awesome. Wonderful views, low traffic, and loads of fun. But we were running out of daylight when we stopped at our last store stop about 20 miles from the finish. So we turned on our lights and kicked it into gear while threading the busy streets and multi-use paths through Roanoke.

Nearing Mill Mountain, Ben K alerted us that his rear tire was running a bit low so we stopped for a breather for him to pump up. Then it started raining. Nice. 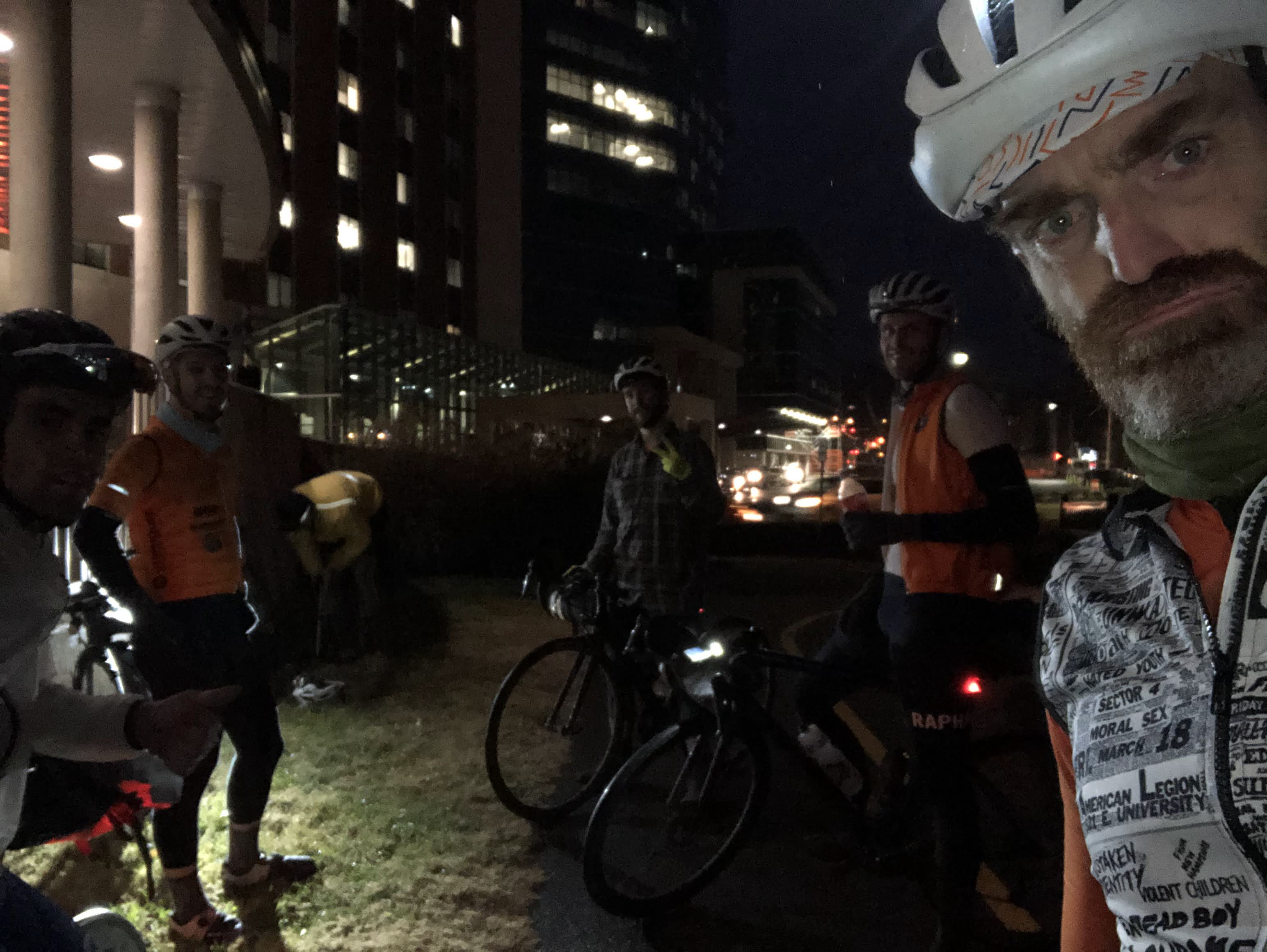 With just an ascent and descent of Mill Mountain to go, we were determined to finish strong. We rode up the switchbacks on the North side of the mountain, slowly watching the city fall away beneath us.

What a great view from the top. 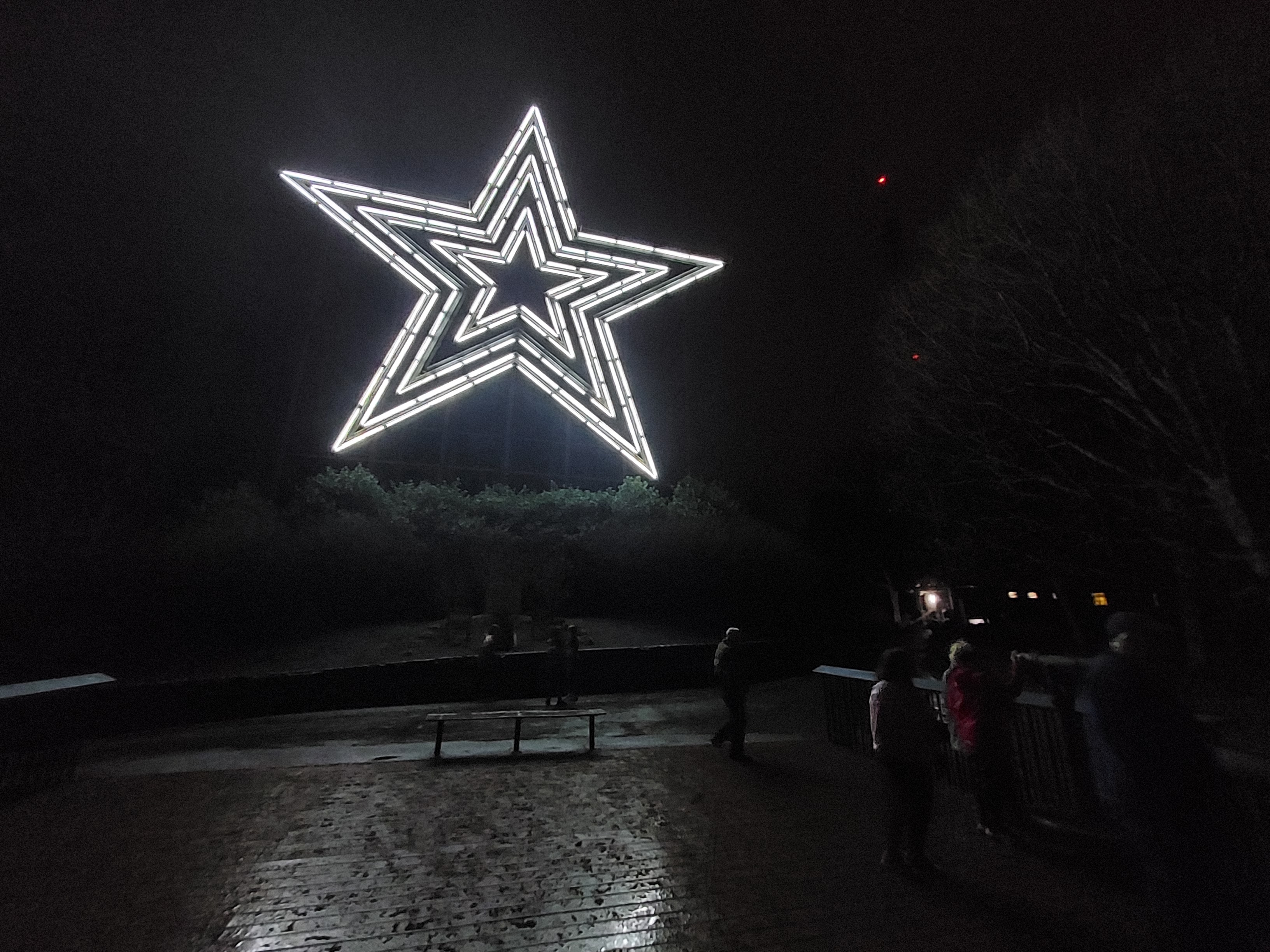 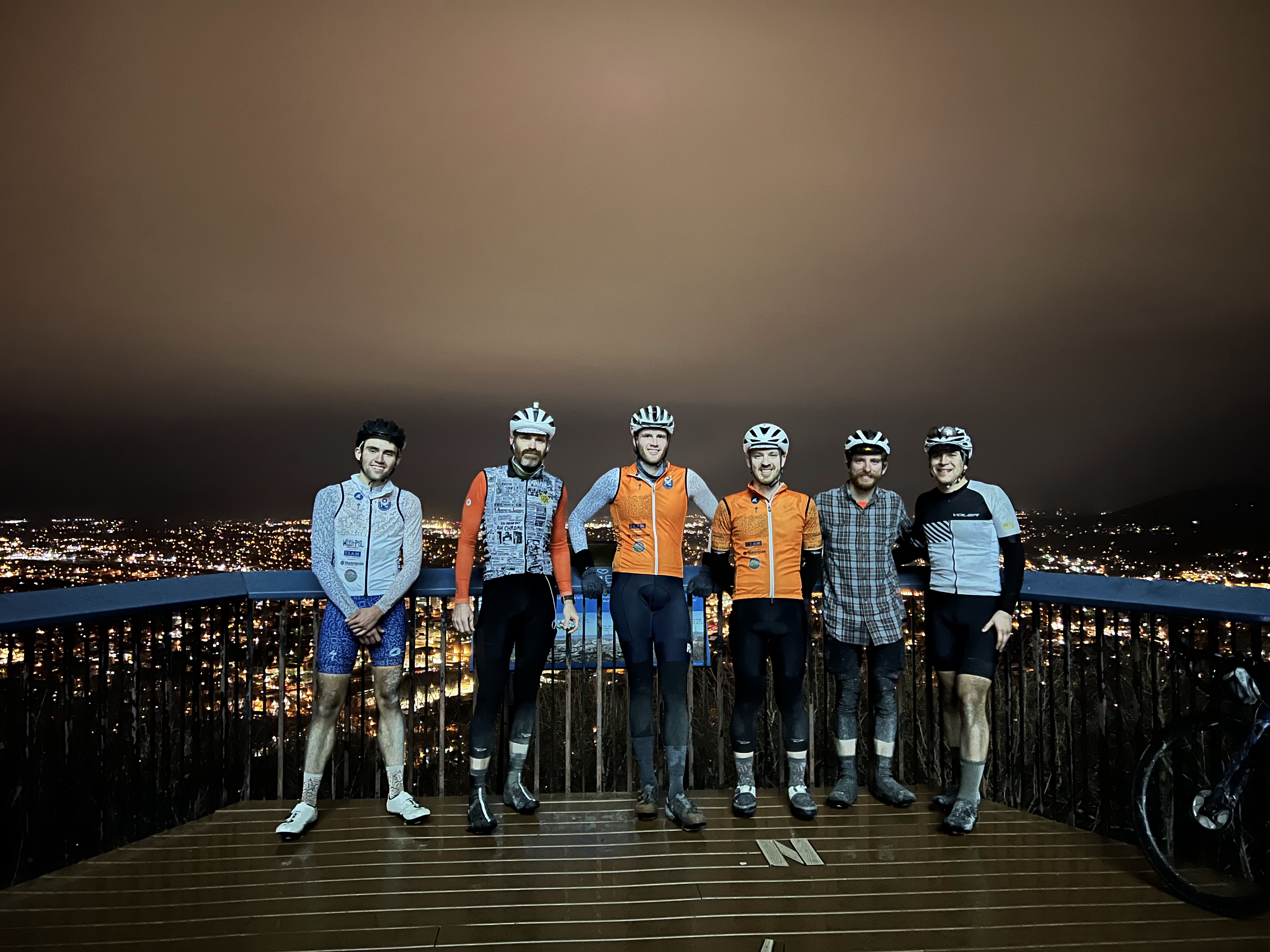 With less than 5 miles to go, we still needed to get downtown to the official finish at Texas Tavern - an old school hotdog place famous for its late hours and chili dogs. We embraced the chilly descent of Mill Mountain in the rain and weaved through the city center to finally arrive at the tavern. 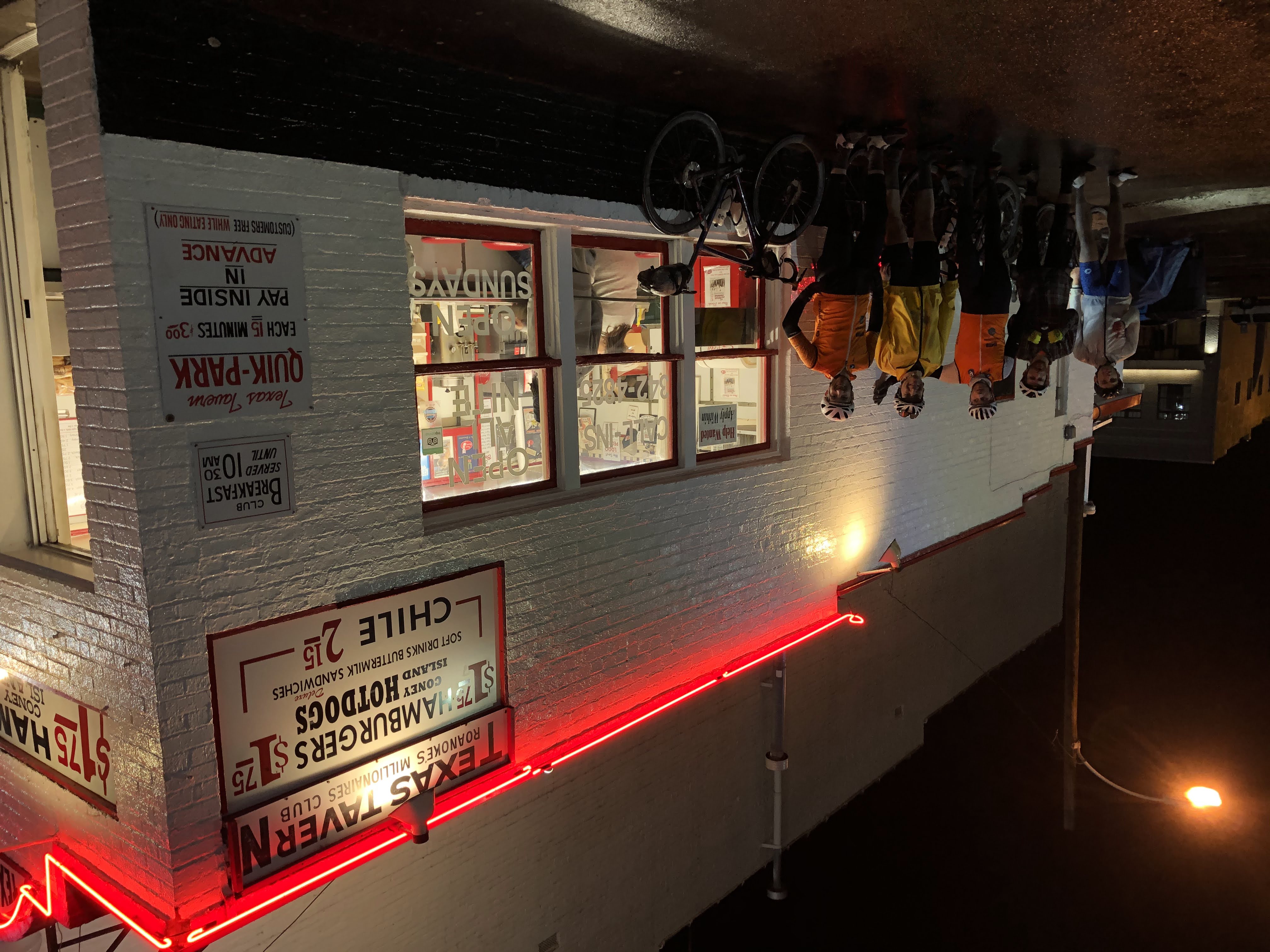 We bought some food from the tavern, but knowing that wouldn’t be quite enough to hit the spot, we ordered some Chipotle via DoorDash to our hotel and rode the final mile from the tavern to our Comfort Inn just outside the city. Toting our dirty bikes and shoes (sorry!) into our hotel rooms we cranked the heat and started to dry out our wet-road-soaked shoes and socks. A shower and Chipotle hit the spot. We all packed along a change of clothes to lounge around in so we could launder our nearly 170 mile kits. Thanks Goates for taking care of the laundry!

The next morning I know I was not the only one to wake up sore. After pounding a continental breakfast and packing up our handful of things back onto our bikes we headed back onto wet roads towards Harrisonburg. 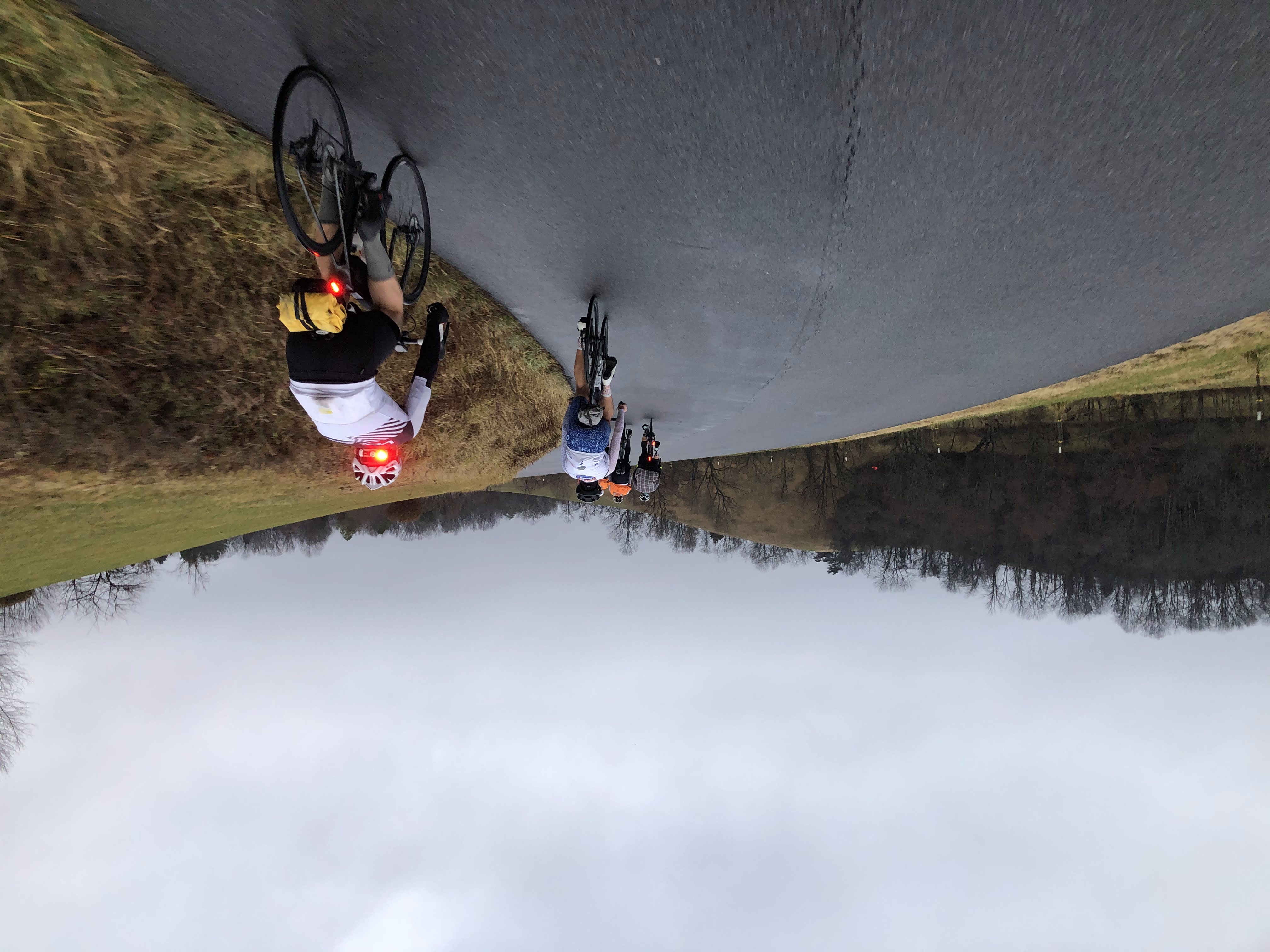 Today’s route was mapped out by me (Darin) and was quite the challenge to try to not repeat roads from the Rockstar Pavè route while also crossing paths with some store stops. RideWithGPS told me it was 100% paved. Boy, were we in for a treat.

Around 30 miles in we were on a quiet mountain road that slowly turned to gravel when we came upon a road closed sign. Well, we were too far in to turn around and go another way, so we trudged through only to find out that it got rough. Really rough. I think I would have been comfortable here on 50mm gravel tires but 28mm would have to do. 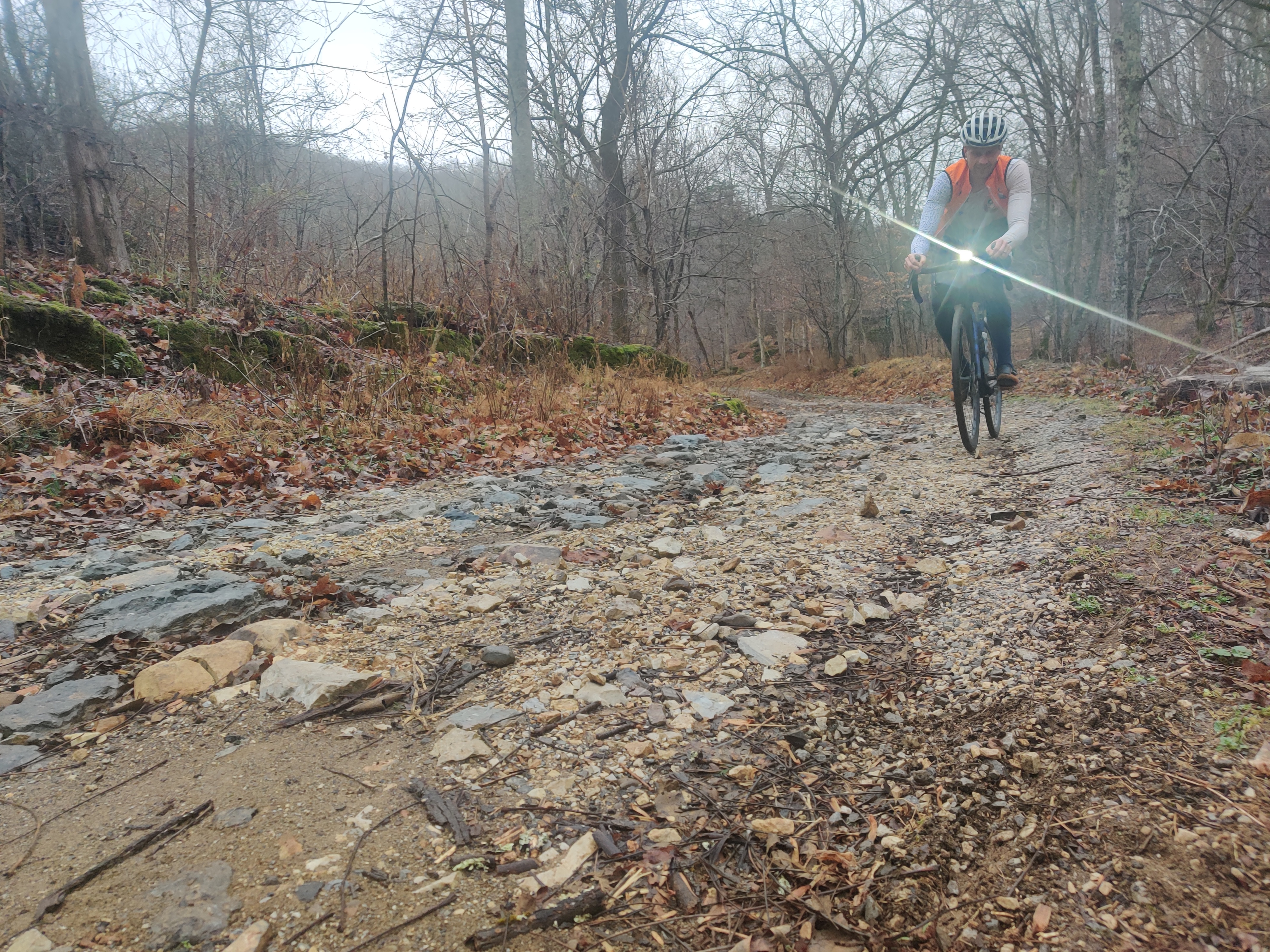 After riding about 10 or 15 minutes down this road that seemed to weave on either sides of a dry creek bed, we stopped to try to guage how much more of this we had. We had no idea when it would end, but were hopeful the next intersection in a mile would turn to pavement or at least smoother gravel.

There was light at the end of the tunnel when we rode past the matching “Road Closed” sign and spotted pavement. 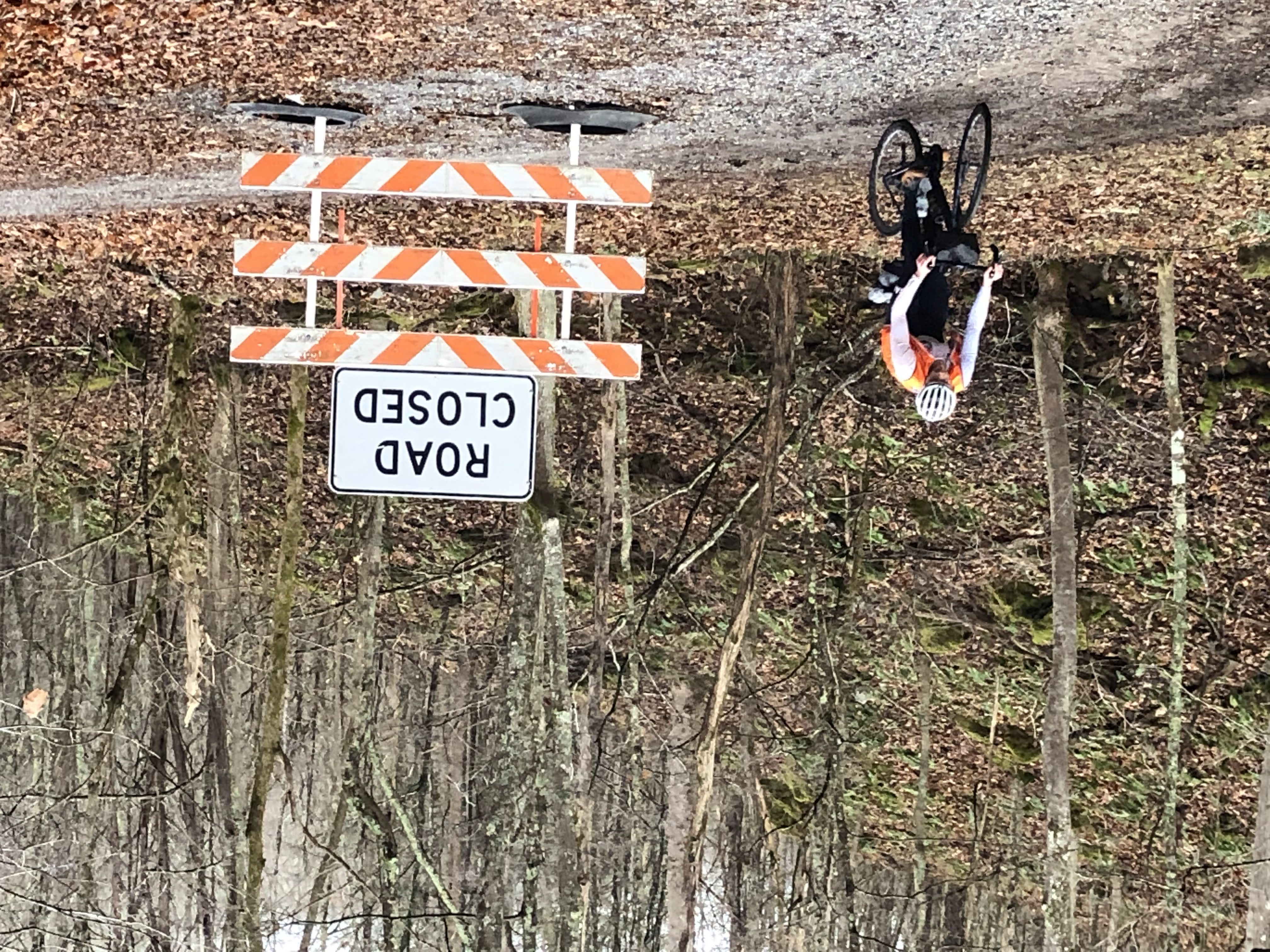 Back on smooth road, we powered through towards the next store stop at the Middlebrook General Store. 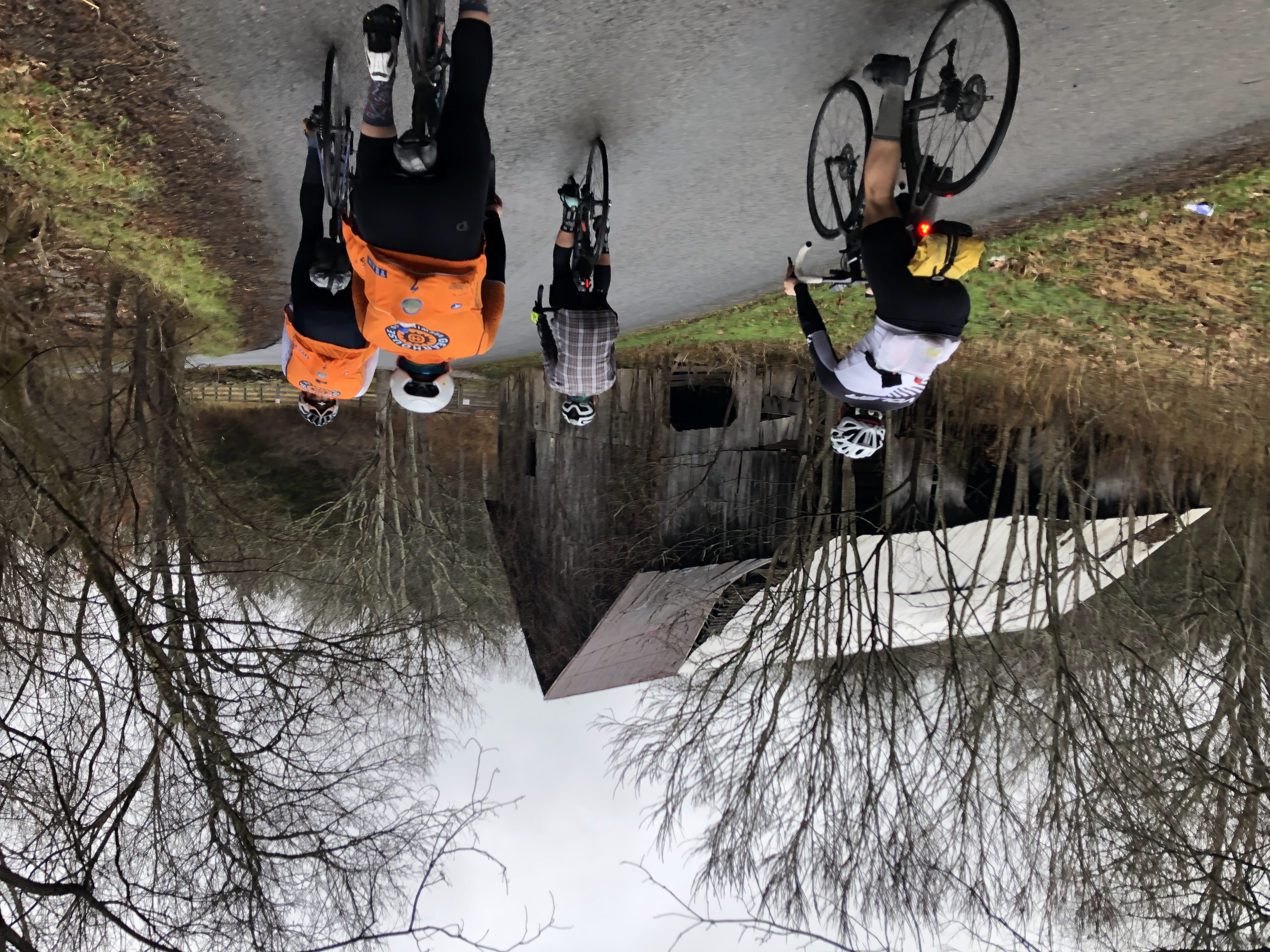 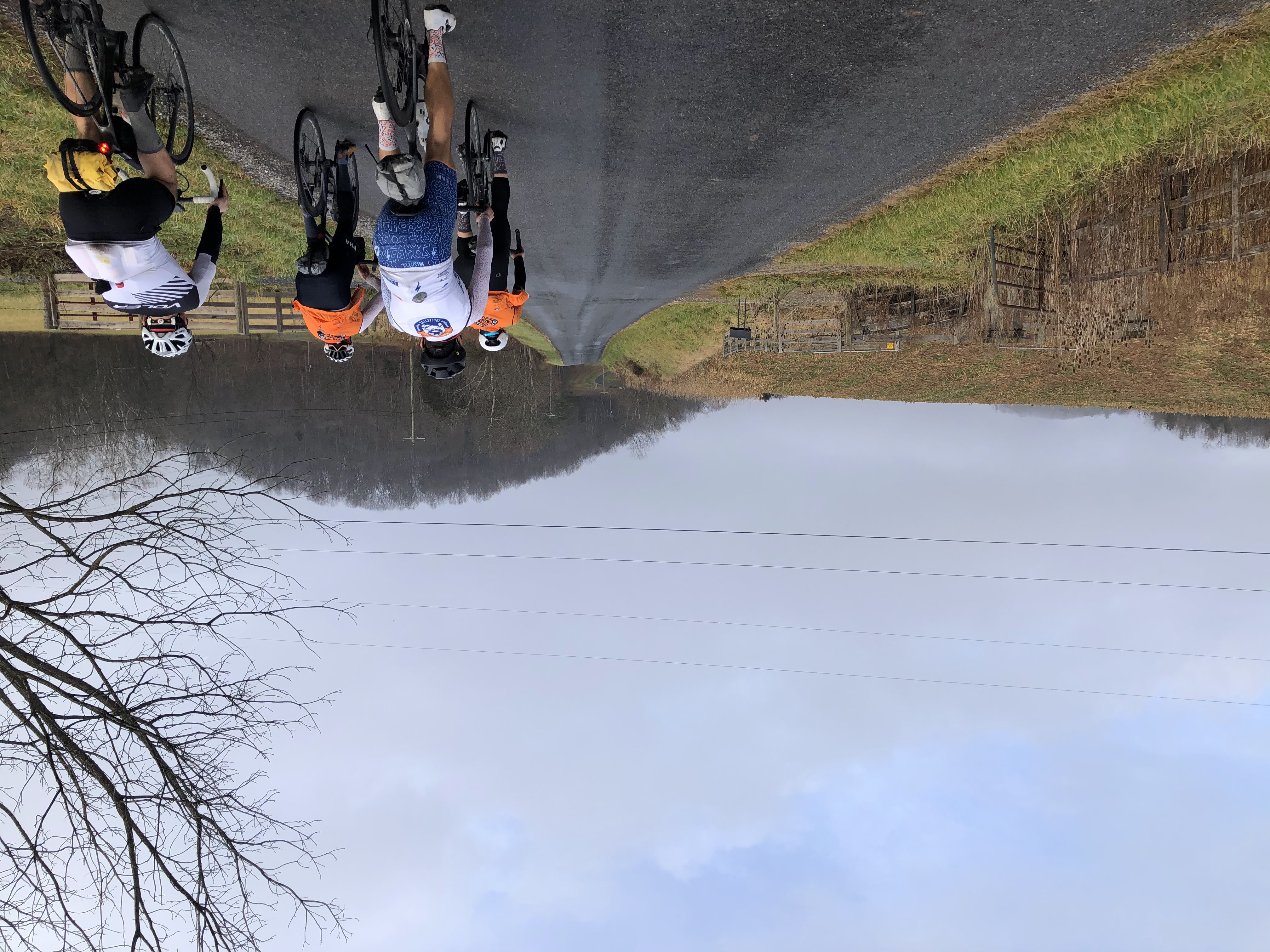 The sun kept trying to peek out, but we never really got to see it for very long. The roads were still very wet but thankfully no real rain. Again, about 50-60f all day - perfect cycling temps. 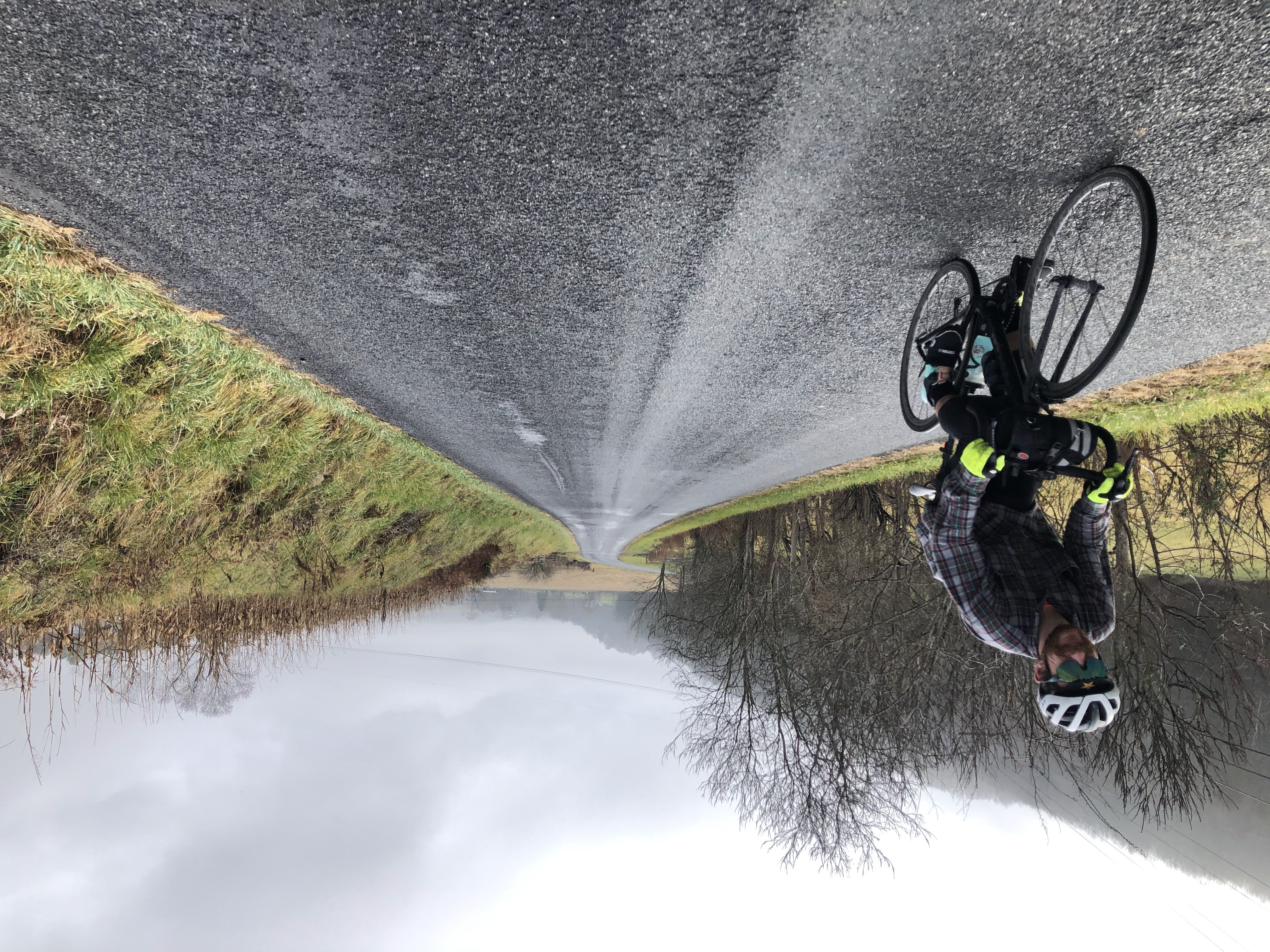 We got closer to Harrisonburg and ended up on quite a number of small, unpaved farm roads. 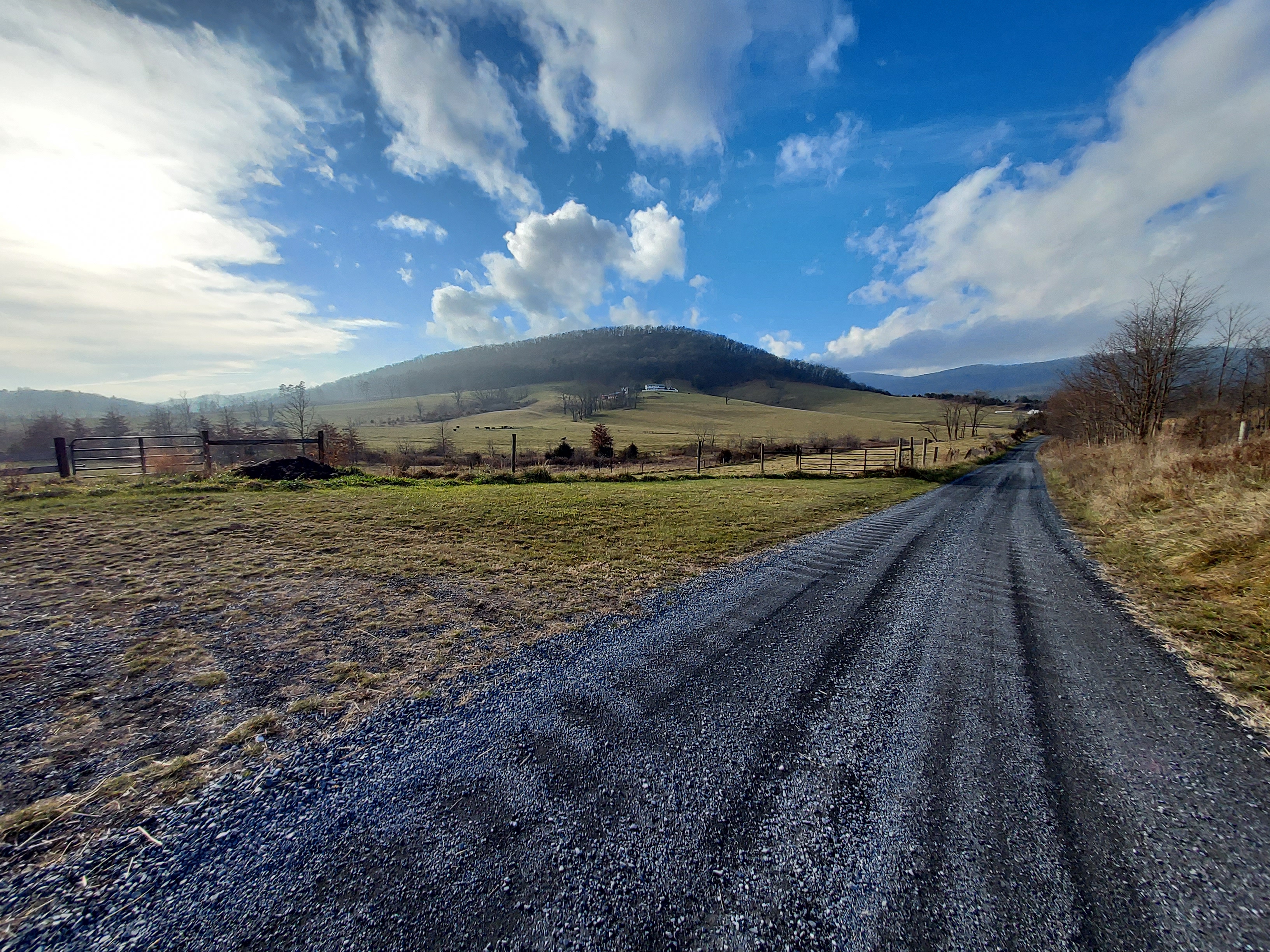 Our final store stop was at the Stokesville General Store, but right before that was a picturesque bridge. So you know what we had to do. 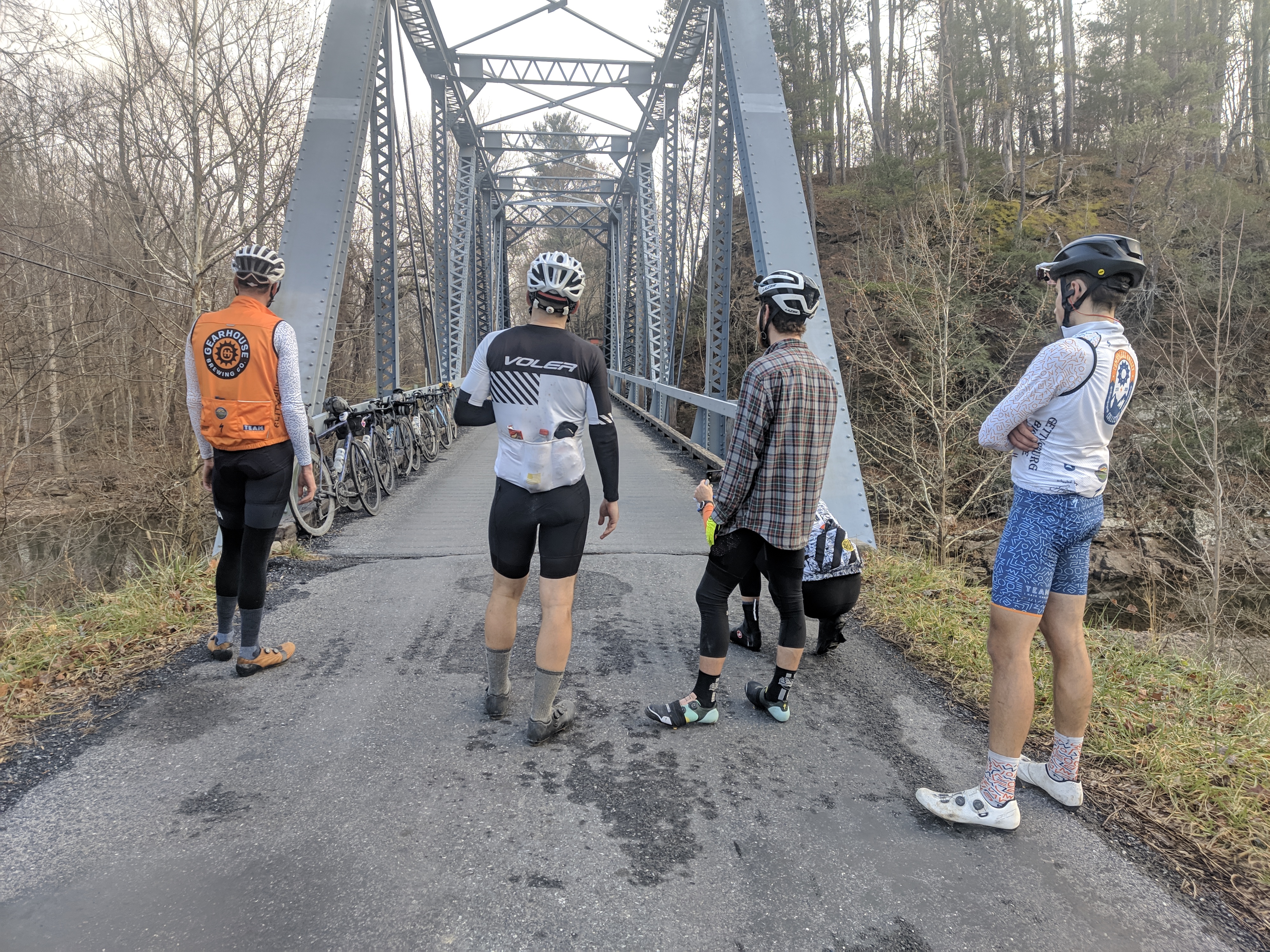 We calculated that the planned route was going to get us just shy of 310 miles for both days, but Goates was determined to hit the full 500k for both days combined so while the rest of us took a break to eat and drink at the store, he did laps up and down the road to get some extra miles.

The last 20 miles into Harrisonburg were mostly downhill on paper, but I guess after 280 miles in your legs nothing really feels downhill anymore. Trying to sneak into town during rush hour wasn’t super desireable but thankfully it didn’t take long to get onto some safer roads. We were racing the sun and we won. We got back to the parking garage where we left our cars a little before 5p but Goates and Briggs weren’t done. They pressed on and did some laps around the nearby JMU campus to get their final miles for the Festive 500. The rest of us couldn’t be happier to see that parking garage.