A few collectivists took a trip down to Blacksburg, Virginia to do a bit of bikepacking exploration in the mountains and valleys nearby.

Kyle, Ben, Nathan, Scott, and I (Darin) loaded up our bikes with enough gear to camp out for two nights out in the woods. After a brief highway climb on pavement, we were on gravel and sending it down a forest road towards the New River. After 25 miles of pavement, we took a quick detour to stop at J&J’s grocery for some snacks. 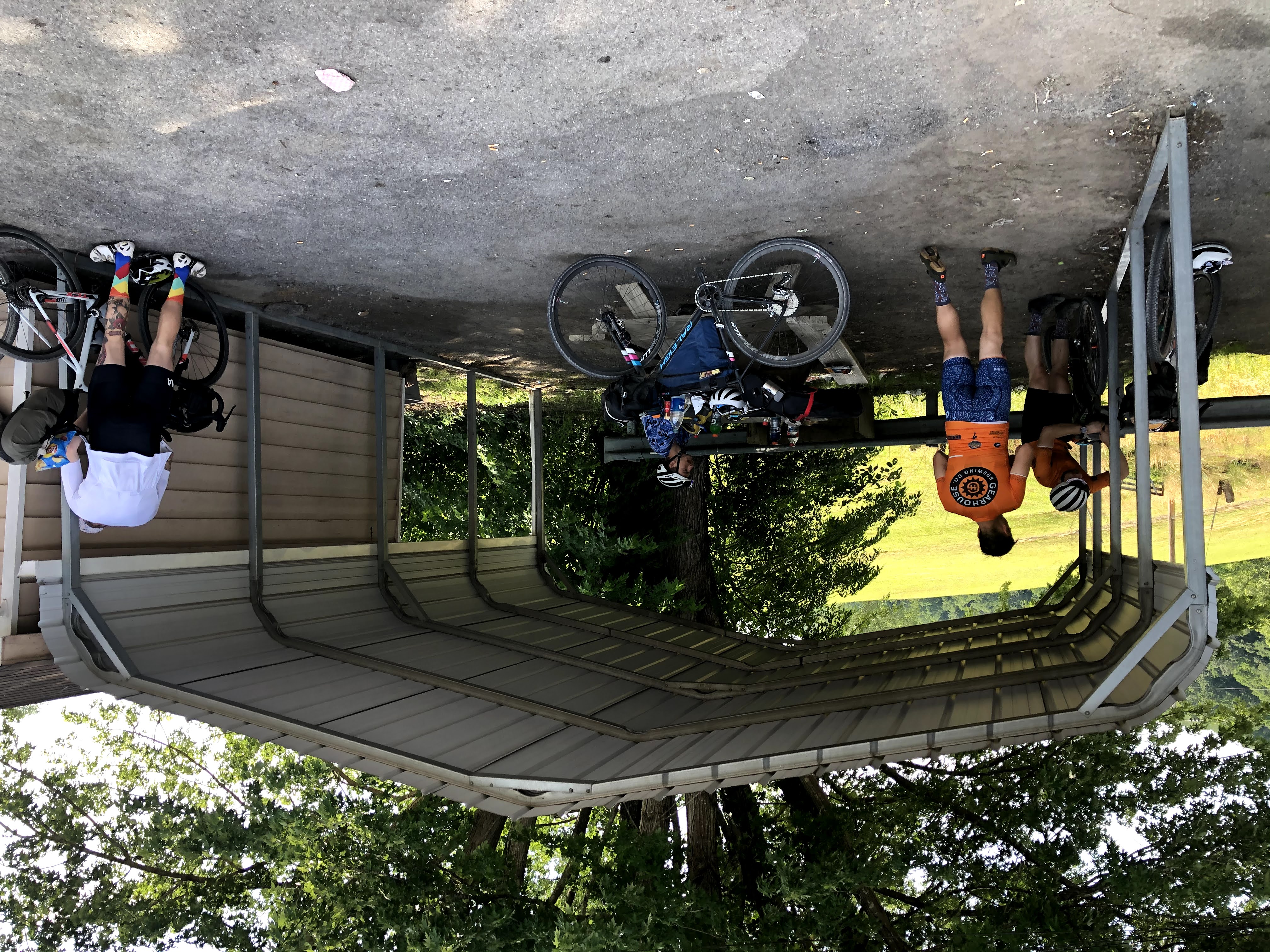 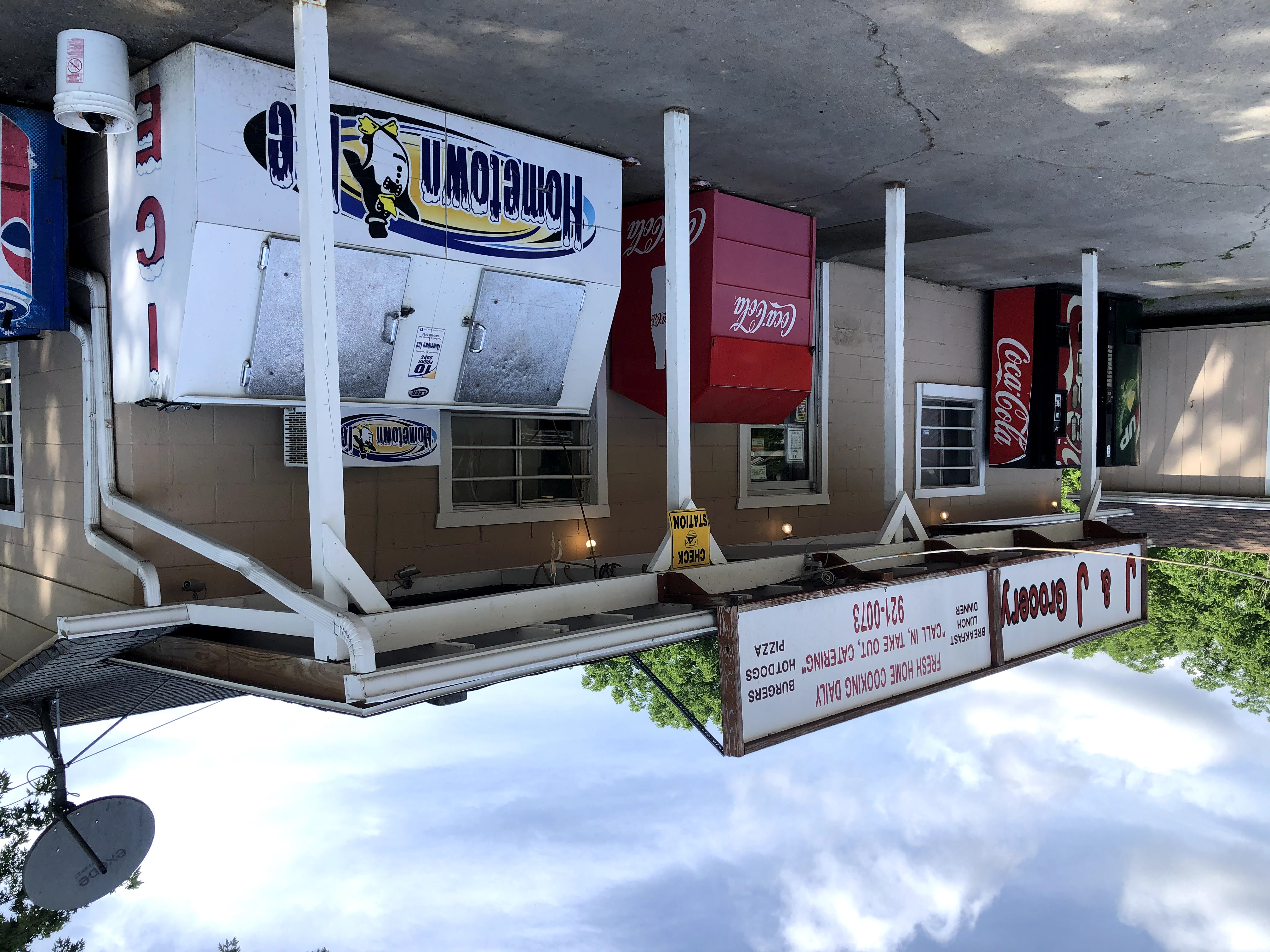 J&J’s is a quaint convenience store that sells hot food, but at 10:30a we just stocked up on drinks and snacks to make it through to the next store at mile 125. Being loaded up, we went up. Way up. From 1,700ft at J&J’s all the way up to the top of Sugar Run Mountain just shy of 4,100ft. After climbing at 7.5% for 45 minutes, we were greeted with a gate and what looked like a wall of rocks. With the promise of a view of the valley at the top, we grinded up the remaining 350ft of climbing at nearly 15% average on golf-ball sized gravel.

It was worth the view. 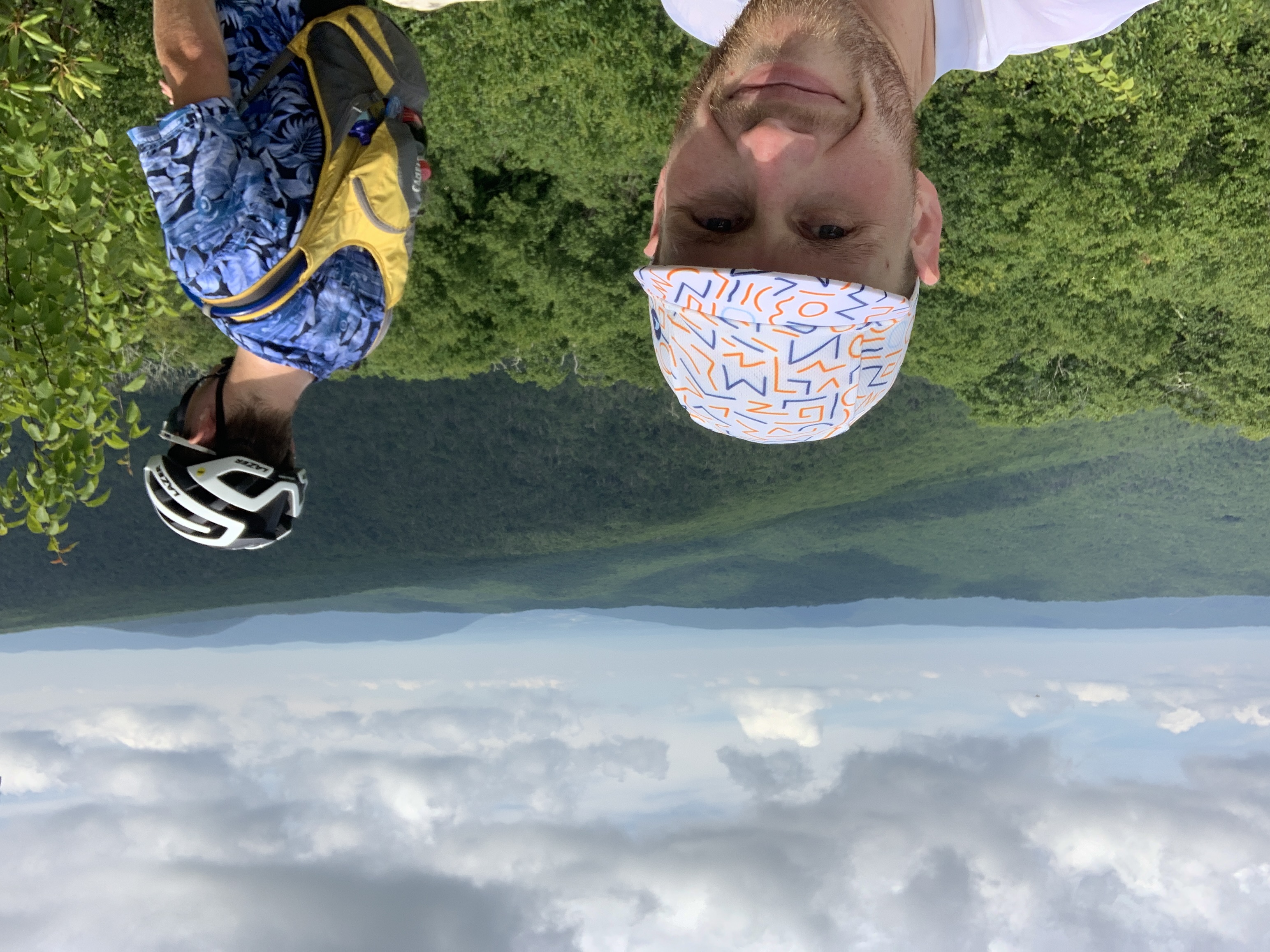 After descending back down the brutal rock wall, we were back on crushed gravel to descend off the mountain heading west towards our final destination for the day: Burkes Garden. Unfortunately, Kyle took a spill on some loose gravel around a tight turn and lost some skin. Thankfully we had some antibiotic ointment and some tegaderm so we got him cleaned up. There was a flowing creek not 50ft from the crash site so we took the time to filter water and top off our reserves. 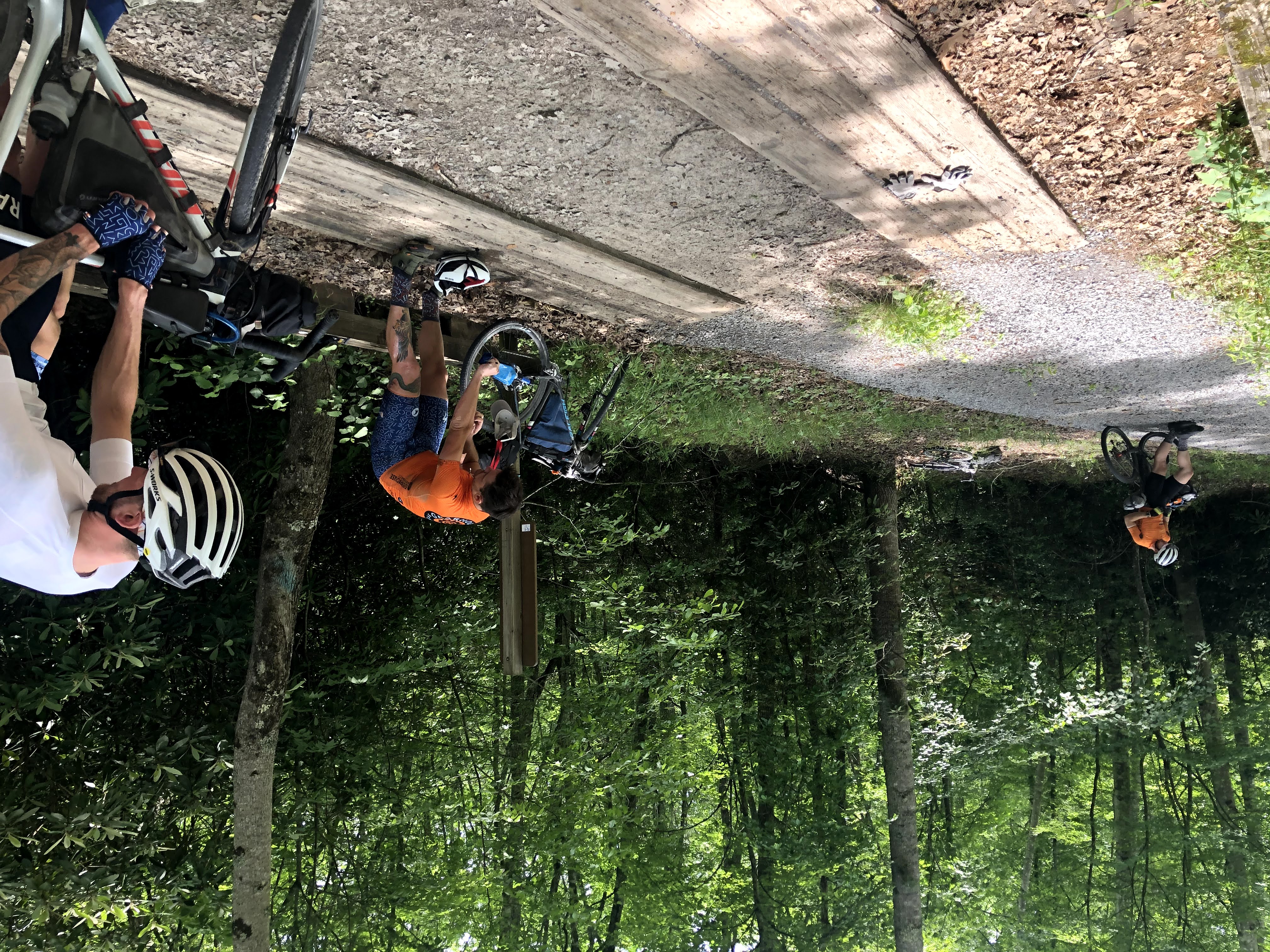 Now 54 miles and 5,400ft of climbing in we started up Hogback Ridge Road. This probably should have been named “Hogback Ridge Trail”. It was fairly rough double track with lots of elevation undulation and trail-wide puddles to navigate.

Goates led the charge on the descent off Hogback but unfortunately the hog bucked him off and he ended up in a ditch. We were originally worried he had serious injuries but he got up and moving around pretty quickly and seemed fine. We’d later find out he bruised his hip pretty badly but he rode on.

At this point, we’re off Hogback but those 11 miles took us over two hours, much longer than we had hoped. We were all very nearly out of water. The next water crossing on the map was at least 10 miles of potentially rough gravel miles away so we bailed out down the mountain to the town of Bland to a Dollar General. Boy, was that nice. After purchasing and consuming copious amounts of snacks and drinks, topping off water, and reviving our spirits, we headed back towards the mountain and our final two climbs of the day. 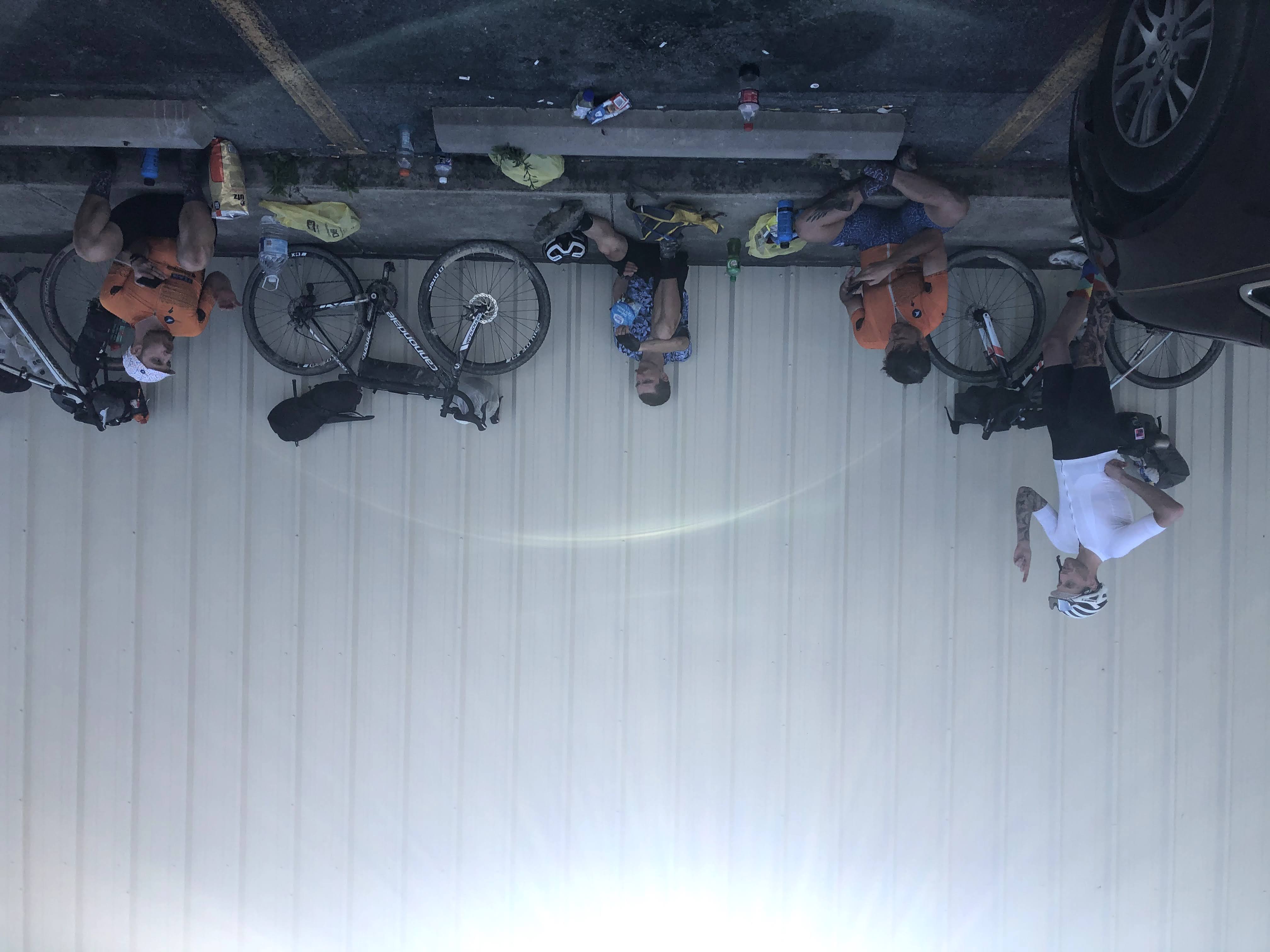 Now 75 miles in and nearly 10 hours since we departed that morning, we were at the base of our next obstacle: a 5 mile, 1,600ft, 5% gravel climb. After riding nearly 45 minutes of smooth gravel, we reached what looked like a dead end but noticed a horse path through the rocks. Thankfully the path led to a gravel descent that led us to Burkes Garden, a geological basin at 3,000ft with mountains completely encircling it at 4,000ft. It was hard to capture with a photo, but man the view of that was something else. Ben got a cool pic of us enjoying the view though. 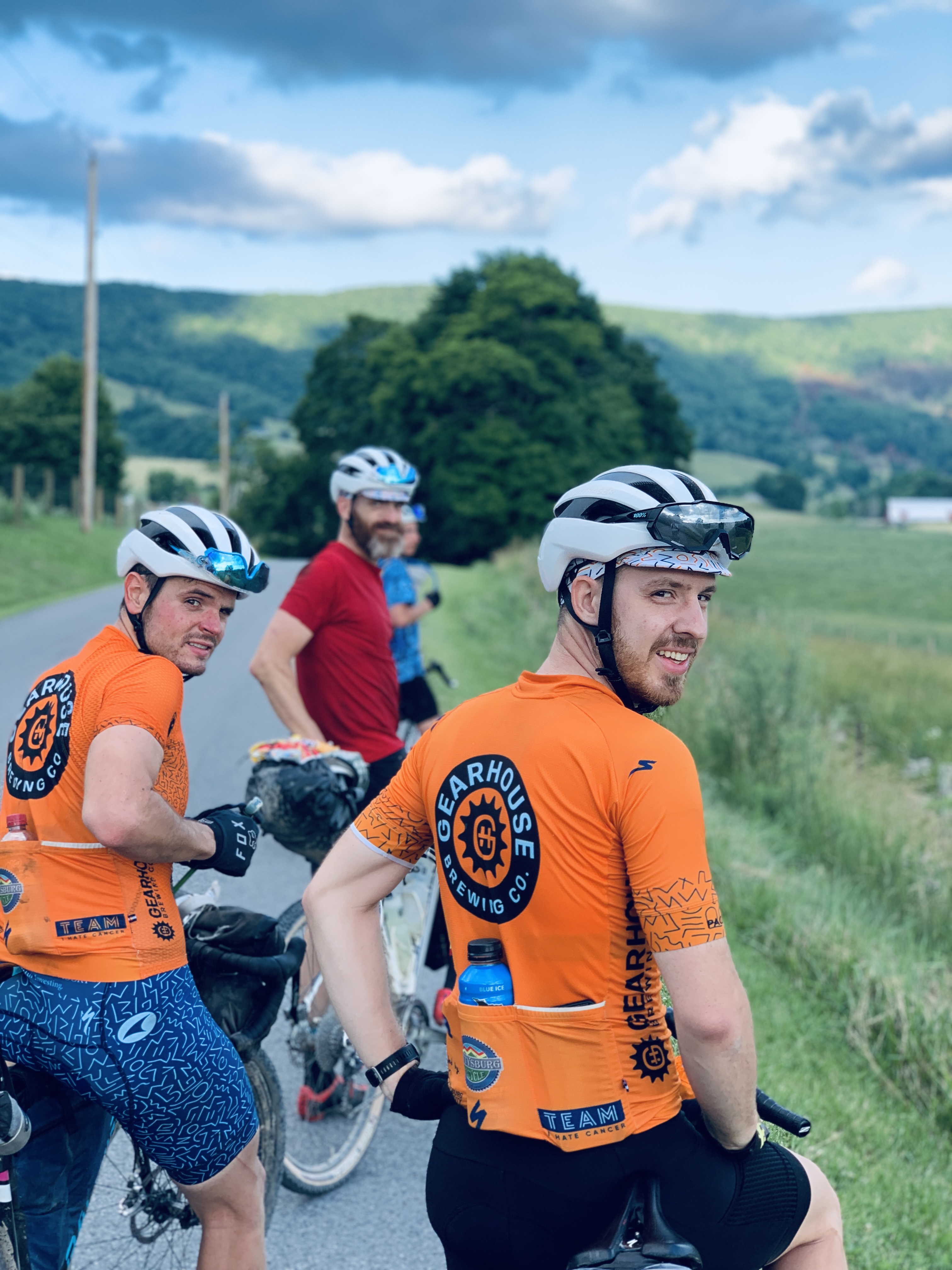 Only one more climb stand between us and our hopes of a campsite. We topped off our water after filtering water from the Snyder Branch creek (pronounded “crik”) and started our final ascent. This climb was full of views and ideal gravel. What a way to end the day. It was almost 8pm by the time we got to the top. When we approached the top we were elated to see that there was a primitive campsite complete with a fire ring. Even better, we found gallons of water. The top of this climb intersects with the Appalachian Trail and a trail angel had put a handful of gallon jugs of water at the intersection of the road and the trail. We set up camp, enjoyed our dehydrated meals and whatever leftover loot we had from the Dollar General. Exhausted after 91 miles, 10,500ft of climbing, and over 8 hours of riding time, we crawled into our tents and enjoyed the cool 65F temp at the top of the mountain as we drifted off to sleep. Quite a day. 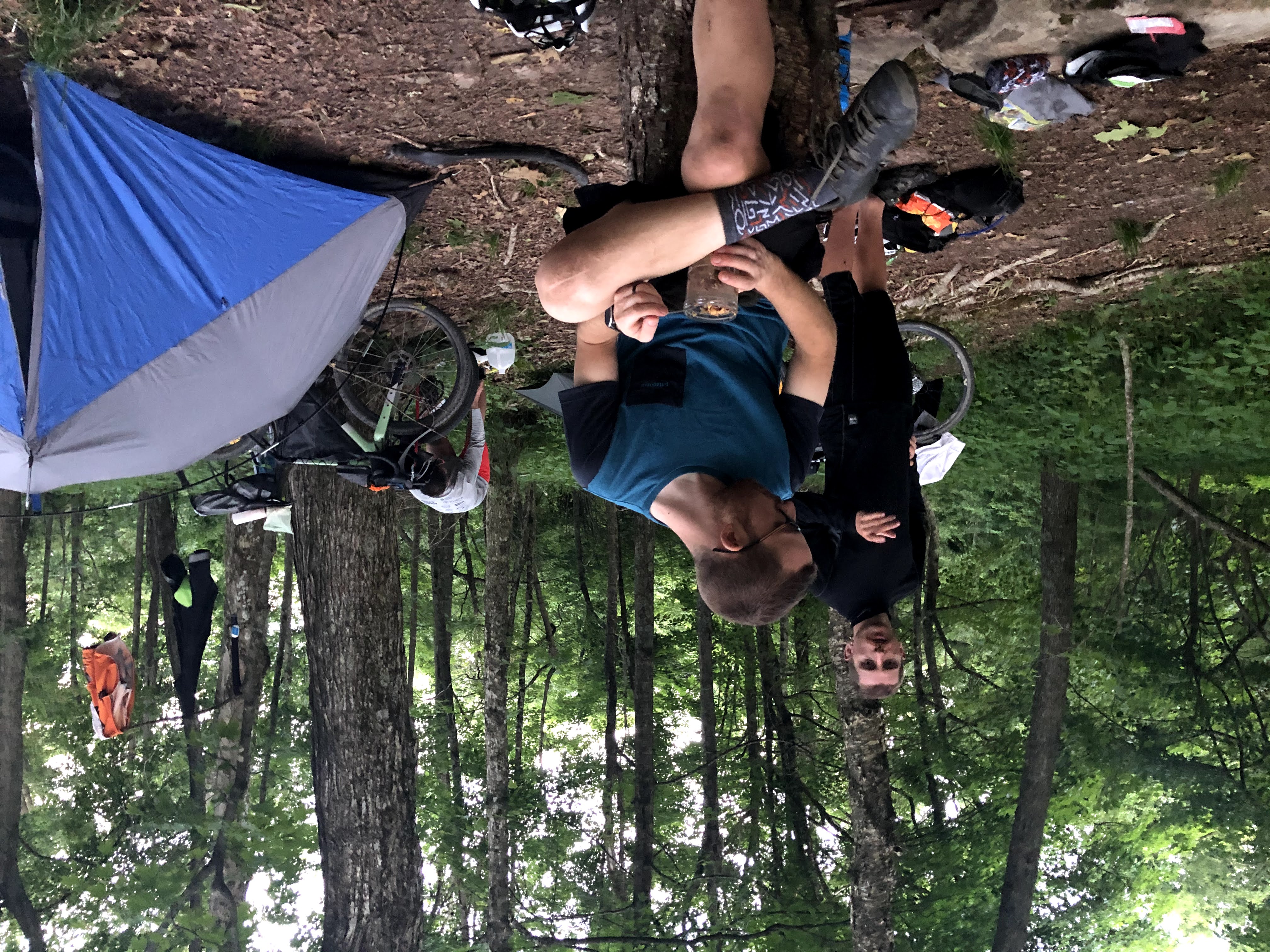 We woke up at sunrise on Sunday morning and began getting ready for the day’s ride: 95 miles and 7,500ft of climbing. Kyle claimed he didn’t get a minute of sleep but the rest of us were fairly well rested. After getting breakfast and packing our things, we started down the mountain on a twisty gravel road. After a 10 minute gravel climb, descent, then a 15 minute paved climb up a road called “Scenic Highway” we came upon the Big Walker Lookout. The lookout is a climbable tower with a view of five states. Unfortunately they opened at 10a and we got there at 9 so we just looked around and chatted with a couple who also got there too early. 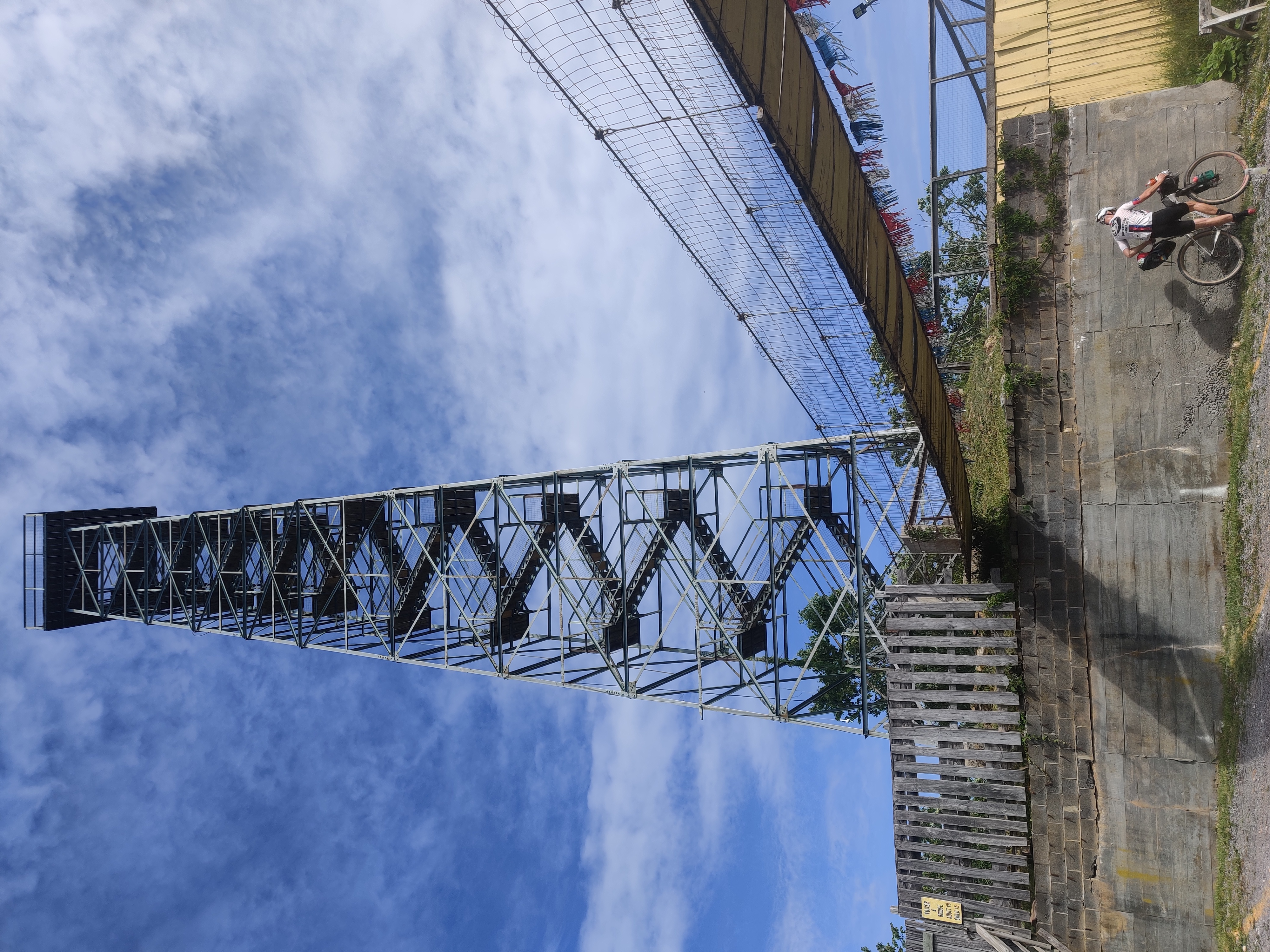 After a beautiful and fast descent down from Big Walker we were on gravel farm roads on our way to the small town of Rural Retreat to stop at a gas station and Dollar General to top off on food, water, and our spirits. We sat on rocking chairs outside of the Dutch Pantry to enjoy lunch acquired at the gas station before heading over to Dollar General to let Kyle buy more bandages to tend to his wounds from the day before. While in there, it rained. Hard. Only for about 10 minutes, but we were thankful for the small porch of the Dollar General.

Back on the road again, we headed south towards the mountain. After rolling through more farm roads we arrived at the base of our largest climb of the day: Hale Lake Road. Nearly 30 minutes later we were at the top and rolling down a short descent to Hale Lake itself. We refilled our water supplies out of the Wolfpen Branch coming out of the lake while watching the clouds loom nearby with the threat of rain. 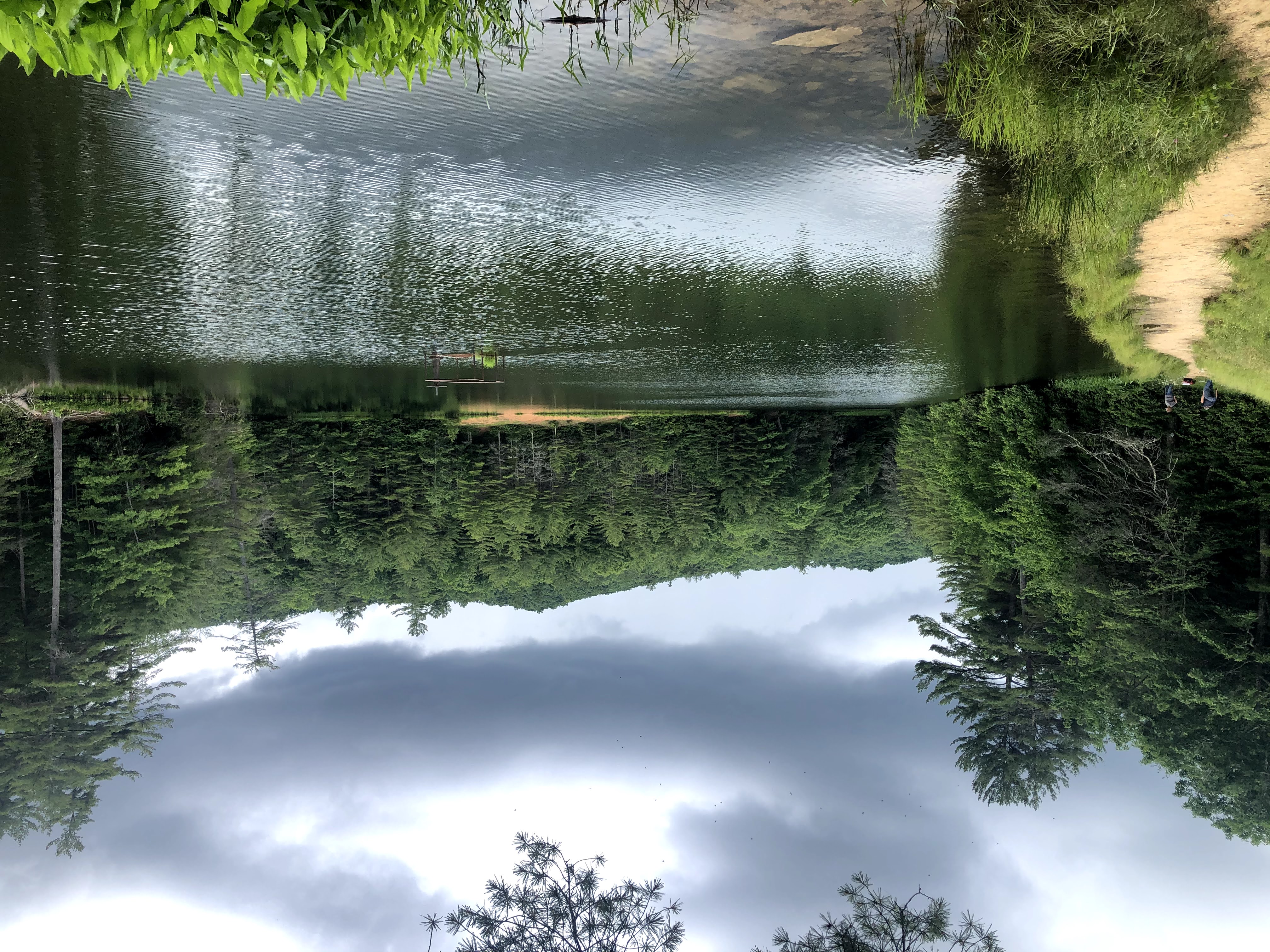 On the highway descent to connect to the next forest road, it started pouring in what seemed like an instant. After a quick turn onto the forest road, we swam through downpouring rain for 10 minutes before we started hearing thunder and seeing lightning. We kept our eyes out for shelter and turned off the road when we saw a day use area with a bathroom. We huddled under the tiny porch of the bathroom while waiting for the storm to pass. 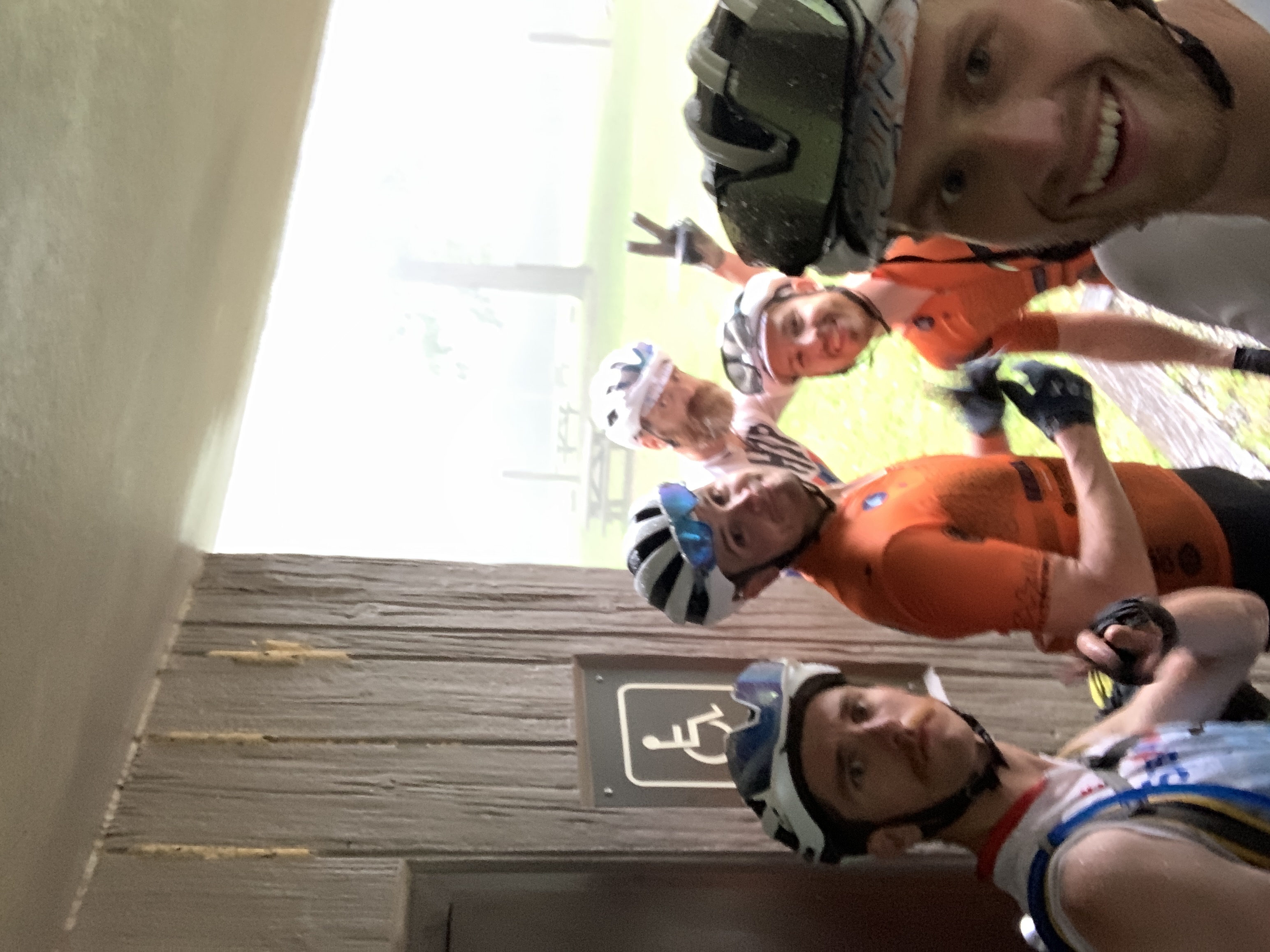 With 35 miles to go to our campsite, we set our goal on the Dollar General in about 25 miles. We conquered a few rollers before plunging down to the New River Rail Trail. No more climbs, just flat rail trail for the rest of the day. The miles still seemed to drag by, but we eventually detoured just off the rail trail to stop at Dollar General to stock up before riding a few more miles to camp for the night.

We all bought and ate food like we haven’t had any for days. Cans of chili were eaten cold, right out the can. An entire package of Chips Ahoy cookies were consumed. Countless sodas and chocolate milks were drank. I bought a summer sausage. 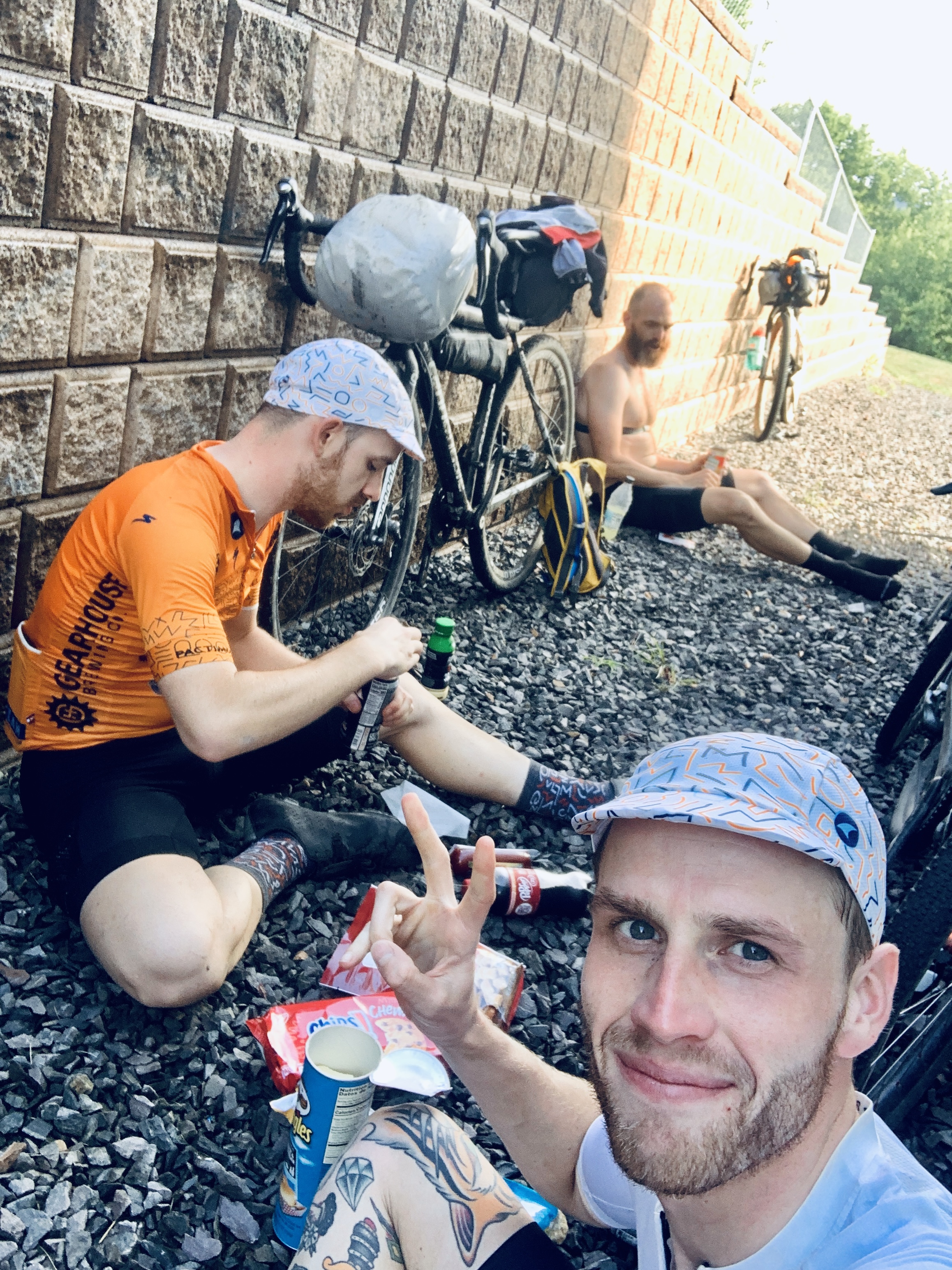 Gorged and bloated, we saddled up for the final 10 miles to camp: New River Trail State Park at Foster Falls. We arrived, found the campsite we reserved, and immediately took a dip in the river next to the campsite. That was certainly refreshing. The campground only had a water spigot and non-flush toilets, but I think you could argue that the river provided a great shower.

We made a fire, cooked our dinners, set up our tents, and uploaded our rides to Strava before hitting the hay. The white noise of the river put us to sleep. Well, except for Kyle. His crossword app put him to sleep.